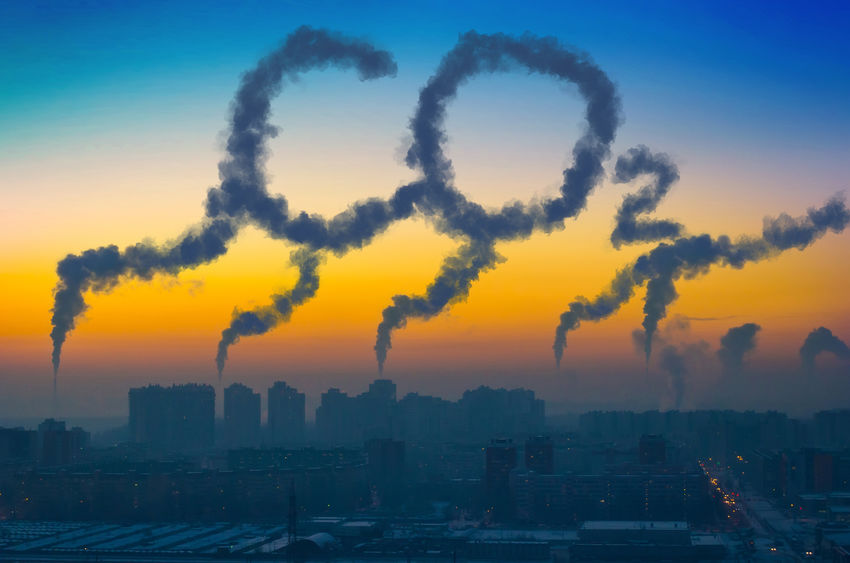 Your CO2 emissions: The number you should track in 2020

You eat a burger. You drive your car. You put your clothes to wash. You buy a plastic bottle of water. You turn on the lights.

Miniscule actions that you take every single day have been suddenly reframed as wicked gestures of recklessness that put our planet in grave danger.

If you have developed some environmental consciousness lately, and you want to make some positive changes in your life to help mitigate the climate crisis, you may feel overwhelmed with the avalanche of messages that kind of urge you to stop living.

The good-intentioned efforts of some activists to prompt people to change are based on the well-known strategy of spreading fear. However, as we don’t typically experience the catastrophic consequences of climate change in our daily life, they end up relying on the terrifying big picture to make their point.

The deterioration of the environment at a global scale is indeed connected through a myriad of channels to our mundane existence at an individual level. For example:

From one innocent meal to the Apocalypse, all the links in the chain are correct, but somehow there is something deeply unsatisfying and almost comical about this account. The problem with this tactic of juxtaposing the big and the small is that, in general, it has never been a good idea to put the burden of all the sins of humanity in ordinary, isolated individuals. Connecting the end of times with everyday actions, shifts people’s minds into a dark religious mode of repentance or, when they remember that in the grand scheme of things a single life is always irrelevant, turns them into cynics.

For me, getting acquainted with the intimidating, large numbers that describe global warming at a planetary level is the only way to understand the climate crisis. Still, at the same time, I find all those figures utterly useless when I want to make adjustments in my life. For some time now I have been exploring ways in which I can translate my own concerns about the environment into actions in my daily life, but in that search, I deliberately look away from the horror stories that come with a planet 6 degrees warmer and focus exclusively on myself as a source of CO2 emissions.

“You can’t manage what you can’t measure” is a favorite one-liner mantra of business managers that applies perfectly for the challenge of mitigating your environmental impact.

If the climate crisis is your main concern, the amount of CO2 emissions is the right metric to monitor. It may seem confusing, but the numbers you typically find of CO2 emissions include not only released amounts of carbon dioxide but also of other greenhouse gases, such as methane or nitrous oxide. These amounts are appropriately converted to the equivalent amount of CO2 with the same global warming potential (some people use the term CO2-equivalent emissions when they want to stress that point). Also, be aware that sometimes you find in some publications references to carbon emissions instead of CO2 emissions. The relation between the two is simple: one ton of carbon equals 3.67 tons of carbon dioxide.

One of the problems with CO2 emissions as a metric is that we don’t have a feeling of what it represents. Last year, every person on the planet emitted, on average, 4.8 tons of CO2, which sounds like quite a lot, but as the gas is invisible, it is difficult for an ordinary person to relate to that number. Some talented activists/artists have created giant balloons representing the size of one single ton of CO2, which then they put in parks and streets. The visual experience you get from them is immediate and striking: one ton of CO2 is enormous, roughly the size of a traditional two-story house!

You probably know that one of the most heated elements in the discussions about global warming is that our contributions to the problem are not homogenous. It is common to hear that your lifestyle determines your amount of emissions; however, what sometimes we don’t realize is that the most critical variable describing your lifestyle is simply the country where you live.

For example, the average emissions per capita in the US last year were 16.6 tons of CO2, more than three times higher than the world average. However, what might be more upsetting for some Americans is that despite how little energy they think they consume, or how committed they are with the environment, their greenhouse emissions are at least twice as high as those of the average person in the world.

The reason for this shocking fact is that even if you are a homeless person, or a monk, or a tree-hugger activist, you benefit from all the services provided by the US government – including police and the military, the court system, roads and bridges, public education and libraries, and even the clunky welfare system that you have over there. The potential access to all those services means that every person in the US has a floor in their CO2 emissions, which is 8.5 tons per person. You can find the details of the study that got these results in this paper written by an MIT professor and his students in 2008 (the numbers surely have changed since then, but probably not the conclusion). An updated version of this research, specific for each of the major economies in the world, is much needed, as the same logic surely applies to every country.

If you need to make a first guess of how much your CO2 emissions are per year, you should start with the average per capita of the country where you live. This number gives you a good indication of the magnitude of your contribution, and you can use it to refine it to your unique circumstances, by adding or subtracting depending on the actions you decide to take.

The decision I made a few years ago, to relocate from Colombia to Europe was the single most impactful action I have taken in terms of my CO2 emissions: The average emissions in Colombia are just 1.5 tons, compared to the 10.3 in the Netherlands, and the 5.7 tons in the UK. I think this is something that my fellow ex-pats should keep in mind – in particular, those of us who relocated from low-emission countries to high-emission ones.

A final note about metrics: Your CO2 emission is the only metric you should be paying attention to. I have seen some meaningless measurements, like the amount of artic ice lost to your emissions, or the “number of years of sustainable travel” that they represent. I guess their creators are trying to make your impact more vivid, but the reality is that nobody pays attention to them, they lack precision, and they are not comparable.

Focusing only on one thing

One of the most fallacious messages coming from some factions of the environmentalist movement is that every single thing you do is a source of irreparable pollution. The illusion that they create with this narrative is that all actions carry the same weight, leading people to change habits that are the least effective in reducing your carbon footprint.

The best example of this misleading strategy has been the war against plastic. The powerful images of sea creatures struggling with the plastic bags that cover the oceans have caused such an uproar that governments and private firms around the world have taken decisive actions to make their use a thing of the past. This is a great victory until you realize that the effect of removing plastic from our lives has an almost invisible effect in terms of reducing CO2 emissions, and therefore it is irrelevant as a mechanism to fight climate change. (This point is made more eloquently in the recent article “Everyone needs to shut the hell up about plastic pollution”, in Wired Magazine.)

We all have limited time and energy that we can devote to make sense of the world and its innumerable problems, so establishing a hierarchy of what matters and what does not, is not optional but essential. Understanding what your real CO2 impact beyond the average per capita in your country (which should be your baseline) is quite challenging, as it is heavily dependent on your particular circumstances and lifestyle. The information that you typically find online, on what changes in your life would be the most beneficial for the environment, is almost always wrong. The issue is that they are conceived to be used by the mythical “average citizen”, who consumes an average amount of resources and emits the average amount of carbon. Needless to say, you are far from average.

To deal with this complexity, this year I decided to identify my most significant source of CO2 emissions and leave the rest on hold. What was the point of redesigning my commute to work if it represents less than 5% of my total emissions? A simple exercise of introspection will surely reveal that most of your CO2 contributions come from one repetitive activity, that is either related to the usage of fossil fuel-generated energy, transportation, waste management or nutrition.

In my case, I use public transport, I get my electricity from a green energy supplier, and I don’t usually throw away food or clothes. At the same time, I eat meat with some regularity, and I also make a handful of intercontinental flights per year. Although the global emissions associated with beef consumption are three times larger than those of the aviation industry, it is clear that my meat-eating habits are in line with those of an average person in the UK, while my frequent, long haul flights are an anomaly. I decided then to make flying my main environmental concern and leave everything else aside (for the moment).

In my next entry, I will show in detail my calculations of CO2 emissions due to flying. I promise it is a fun exercise!

This is the fourth entry of my series on Climate Change: