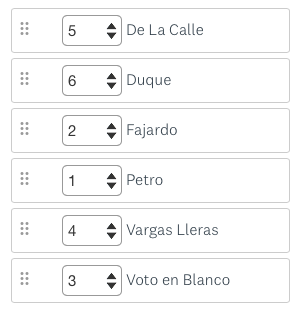 Last week I did a survey about the preference that there was for the candidates for the first presidential round in Colombia this year. Those who took the survey could organize the five candidates, plus the blank vote, according to their preference, from what they considered to be the best option (and assigned a value of 1) to the worst of all (to which they assigned the value 6). The following image shows two examples of how it could be answered.

and the example on the right can be written like this:

The survey was answered by 252 people who saw the survey on my Facebook profile or on one of my friends who were kind enough to share it (thank you very much!). I knew that the sample was going to be too small and biased to make predictions of what was going to happen on May 27, but this did not matter to me because what I wanted to do was something different. My intention with this poll was to do a first experiment of what kind of results we can get when we incorporate the spectrum of our political preferences in elections.

The simplicity of our choices hides the great complexity that is generated in a society whose individuals do not see politics in black and white but in a range of colors. Regardless of whether you support Petro or Duque, the way in which someone perceives the rest of the candidates can offer very valuable clues about the type of society in which you want to live. Compare, for example, the example on the right I gave earlier (Duque> Vargas Lleras> Blank> De La Calle> Fajardo> Petro), with the following order of preferences that someone else might have:

Both people support Duque, but can you feel that there is something different between them? Can you identify the kind of desires and fears that one or the other may have? Can you imagine what these two people are like? Do you know them perhaps? Tell me what you think of these two people in the comments section.

A basic math exercise shows that there are hundreds of these chains when there are six candidates (extra point to those who say the exact number) but before doing the survey I thought that in real life people would only have preference for a few of these. The surprise came when I told that between 252 people 86 different preference chains were formed, many of them marked by just one or two people.

Now comes the million-dollar question: How can we make sense of all this information? The key here is to find some way to group the different responses together to get a picture of the set of voters. Here are some options:

Petro and Fajardo have swapped positions!

I hope that the reader who has come this far is feeling a bit of discomfort with all these results. We start with the illusion of being able to incorporate a broader spectrum of preferences than we currently have, but what we get is that the results fluctuate depending on the weight we give to each of the candidates. How can we interpret all these results? Who should go to the second round? Which of all these results is correct?

The answer is that all of these results are correct. No one can claim to be more natural than the other. They are all equally arbitrary, including our current plurality system. It is puzzling and I will have to explain this in detail, but it will be something that will have to wait for the next entry.