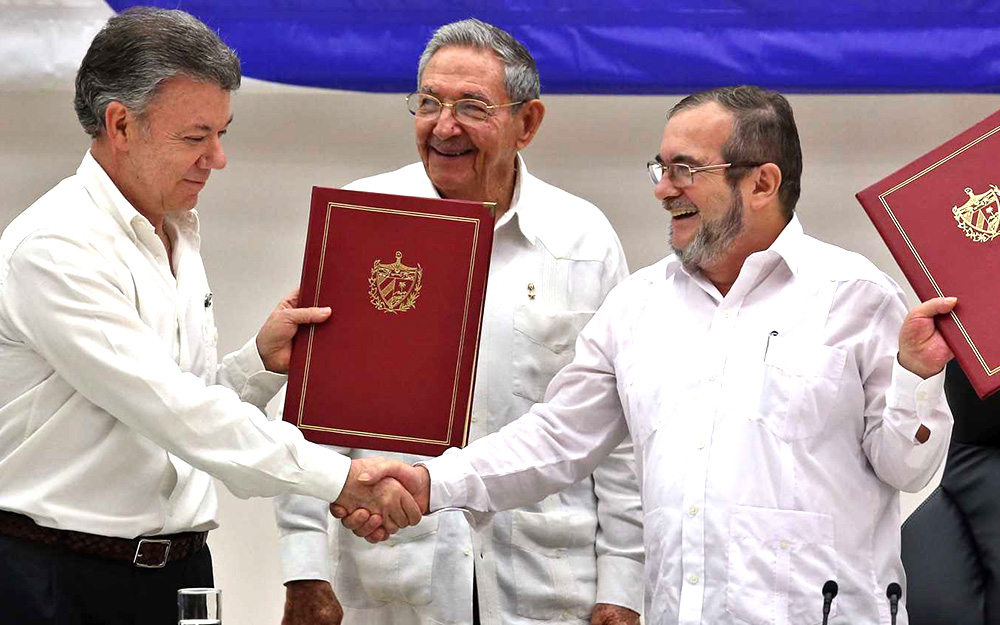 The Seed of Doubt: The Impact of the Deal with FARC in Colombia’s Violence

Here is a personal anecdote, of something that happened three years ago, during the days of the referendum for the peace agreement in Colombia. It was the summer of 2016, and I was one of the millions of Colombians who were sure about the benefits of the deal that the government had reached with FARC for its demobilisation. I suppose that I will offend half of my readers when I admit that two years before I had already voted for the re-election of Juan Manuel Santos, precisely because at that time it seemed to me that it was best to let the process move forward. Calling the people to endorse the agreement was an absolute stupidity (something that I already wrote about in this blog before), but to me, voting in line with what the government had been working for four years was the most coherent thing to do. There was some light at the end of the tunnel.

One morning of that summer, reading what good Mark Zuckerberg had decided that I should read that day, I came across the short text of a friend who, exalted by the impending end of the conflict, asked the crowd:

“Can you imagine how many lives will the agreement save?!”

His question was perfectly posed, with the keyword “imagine“, inviting his friends to dream of a country in peace, an exercise that for any Colombian can only exist in the world of fantasy and mere speculation. Cheering for his enthusiasm, I must have replied him with one of those light and superficial comments that we say when we do not have anything to say: “Oh yeah, good point, can you imagine!? Must be a lot in any case! Life is sacred. Long live peace!”

I did not realise then, but at the very same moment, I was living my own Inception experience. Just as in the Christopher Nolan movie in which Leo DiCaprio gets into his victims’ dreams to implant an idea in the subconscious, the question of how many lives the agreement could save got stuck in my head. It was such a simple question that surely someone had already answered it. The problem was to find that answer through the flood of information and misinformation that ran through those days.

The historical agreement with FARC, announced with such jubilation, had to have a profound impact on the dynamics of violence in one of the most violent countries in the world. Of course, I did not expect the cease of all violent deaths in Colombia, but I did have a deep conviction that the agreement had the power to break the trends of violence in the country.

Just a couple of days later, the following headline on Bloomberg was blinking on my computer screen: “Colombia and FARC Rebels Reach Final Deal to End 52-Year War.” The news echoed what I had already read in other newspapers, but halfway through the note, I saw a figure that I had not seen before. 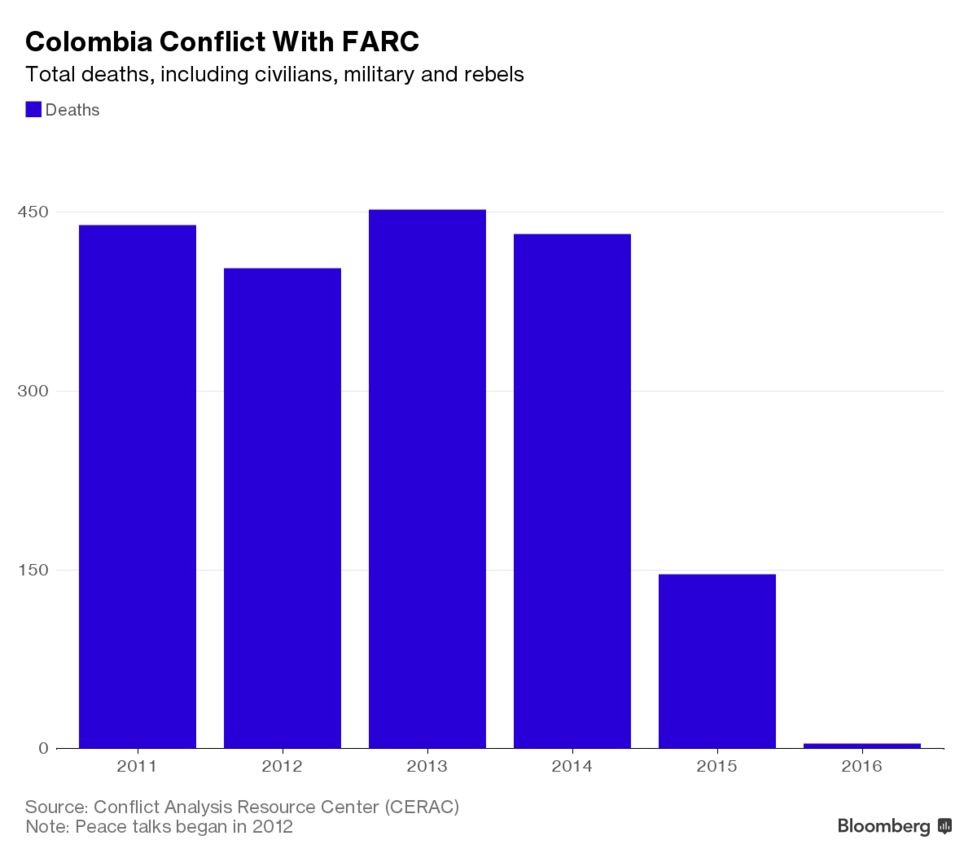 For a moment, I stared at the figure. I read the footnote, below those blue bars. Then, I quickly went back to the text and then back to the graph. I leaned back in the seat, put my hands behind my head to support it, and stared again at the figure.

There was something deeply troubling in that graph.

We need to talk about this graph

I love the graphs. They are powerful communication tools, capable of telling a story much better than several paragraphs of text, without having to sacrifice the numerical content that you find in a dry table of numbers. However, sometimes because of sloppiness and sometimes deliberately, graphs can confuse more than they can illuminate. Perhaps it is my own scepticism, after many years immersed in trend lines, histograms and pie charts, but the first thing I usually think when I see a new graph is, what are they hiding?

Let’s go back to the graph in Bloomberg’s note. The blue bars correspond to the total number of civilian, military and rebel deaths due to the conflict with the FARC. From one year to the next the number of deaths falls to a third, and on the next one, the number of fatalities disappears almost completely. How can anyone interpret this figure? A natural explanation is that thanks to the peace process, violent deaths had gone, most likely since the cease-fire that began in 2015. And even more, the graph suggests what would happen if stopping or reversing the process: the blue bars would grow back again inevitably to the previous levels. Anyone sensitive to numbers could infer all this, just by taking a quick look at the graph.

However, what caught my attention were not the blue bars, but the numbers on the vertical axis, which ranged from 0 to 450. At that time, I did not know the figures by heart, but I was sure that homicides in Colombia could be count in the thousands. If 52 years of war left 250 thousand dead, would not that mean that there were around 4,800 deaths every year due to the conflict? How was it possible that the number of fatalities was 450, even before the peace negotiations began in 2012?

These questions were the ones that caused my confusion when I saw the graph. If you do not care too much about causality, you could say that the chart had the answer to the question that my friend posed: the agreement could save some hundreds of lives, say, in the order of 450 a year. But that would imply that after signing and implementing the peace deal, a deal that would “bring an end to the night of horrors” as stated by Mr Santos, there still would be thousands and thousands of deaths every year. The number of homicides in Colombia in 2015 was 12,625. Could the agreement only scratch the surface of that number?

A quiz to my friends

My first reaction was denial. The peace deal was going to change the dynamics of violence in Colombia, and there was no doubt about it. My interpretation of that graph was clearly wrong, and surely there was something I was not understanding; perhaps there were second-order interactions that I was not taking into account.

I began to look with more determination for a source that did not merely “imagine” how many lives the deal would save, but one that would do the had done a serious and thorough estimation. There must be hundreds of researchers around the world, specialised in Colombia’s violence, and they have produced sufficient information on the subject, which is essential to understand a formidably complex problem. However, in my initial exploration, I did not find anyone that could provide hard numbers, instead of soft adjectives, about the expected levels of violence after the deal.

My frustration only grew more when I attended a talk addressing the economic impact that the agreement with the FARC could have. The technocrats of the National Planning Department had managed to estimate that “peace could contribute between 1.1% and 1.9% to the potential growth rate of the Colombian economy.” Those were wonderful news! But, if someone had bothered to calculate the impact that deal could have on GDP, why I was having so much difficulty finding what could be its impact on violence? The most significant benefit that the agreement should have was on peace itself; its revenues to the economy should be just a happy by-product.

It was time for me to admit my ignorance and confusion about all this. One morning I pulled the data I found from Medicina Legal (the forensics division of the government) and put together the following graph and text that I uploaded to Facebook:

To all the people interested in the Government-Farc deal, here is a quiz:

Assuming the Government-Farc deal is approved, would you expect the homicide trend to change significantly in Colombia? Do you think it is a relevant question in the ongoing debate?

The graph shows the total number of homicides (*) in Colombia over the last 25 years, and three possible trajectories A, B and C for the future. 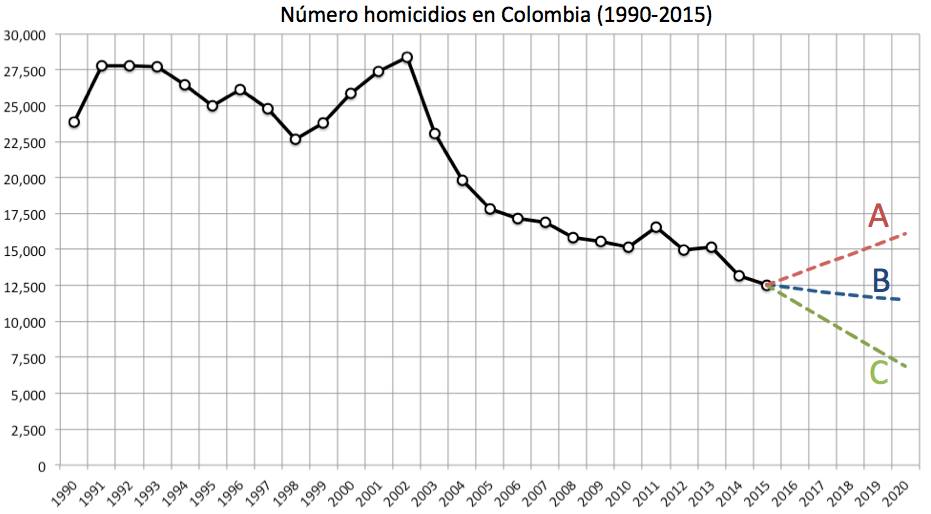 Continues in the following entry: Predicting The Tragedy: Some Forecasts Of Violence In Colombia.

You may also want to read the third part of this series: The “Peace” Deal that Does Not Bring Peace.