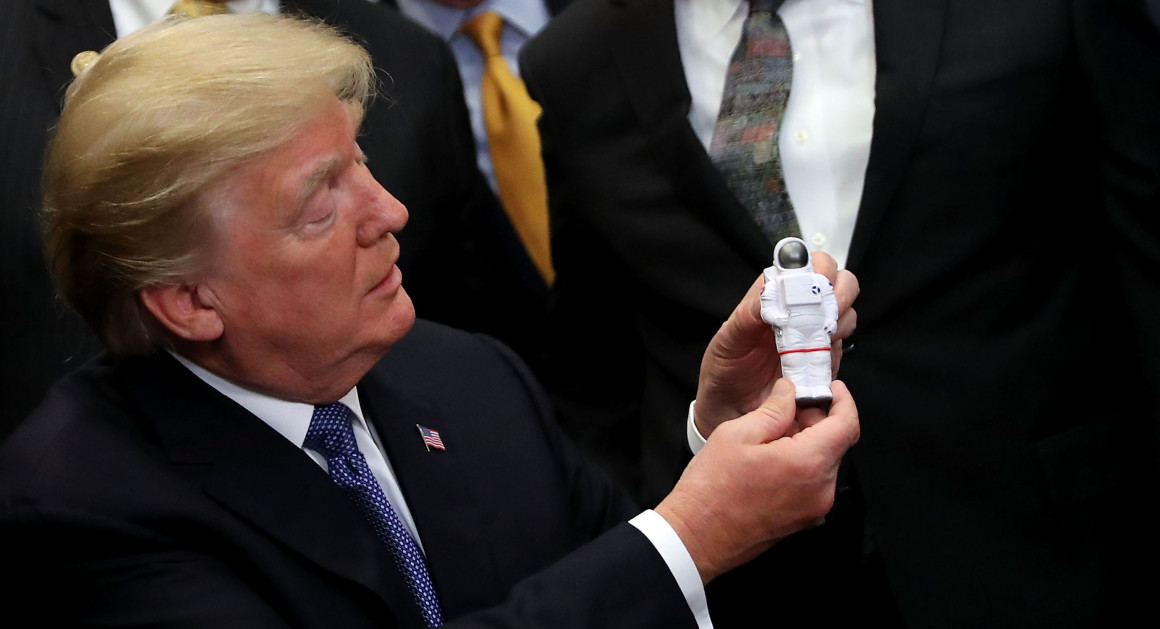 T-5 Years: America’s dubious countdown to go back to the Moon (Part 2)

The clock is ticking in a countdown for America to go back to the Moon. Back in March, Mr Pence announced that the current administration wanted to see humans again in our satellite by 2024. This announcement took everybody by surprise, as the most optimistic deadline for accomplishing this feat was 2028. Is this plan realistic? I personally don’t think it is, and I seriously doubt that NASA will be able to fulfil the promises of the Artemis program, the cleverly named project that will attempt to send a woman to the Moon for the first time.

It is entirely possible that other players get there in the 2020s, perhaps in the form of a private partnership, like the ones that have been suggested by some prominent billionaires, but it is improbable that it will be accomplished in the way envisioned by the Trump administration. To give a bit of context, I wrote in my previous entry the case of the failed Constellation program, which was born during the presidency of George W. Bush. In this entry, I want to draw some lessons from the most successful space program ever, the Apollo program, before going into the reasons behind my pessimism about Artemis.

If you haven’t read it yet, you might want to read first my previous entry: T-5 Years: America’s dubious countdown to go back to the Moon (Part 1).

Between July 1969 and December 1972, six pairs of astronauts spent in total almost twelve days on the surface of the Moon, exploring the desolated landscape, deploying scientific equipment, and carrying out experiments. They took some six thousand pictures and brought back to the Earth a total of 382 kg of lunar rock and soil. These achievements were the peak of space exploration but were a far cry from the space civilization that many thought we were about to establish. The success of that first incursion to our satellite surely is impressive but modest compared to the colonies in the Moon and Mars that many expected should exist by now. “Why we never returned?” is a fair question that probably has pushed some to believe that the whole thing was a hoax.

The truth is that those twelve days on the Moon, those six thousand photos, those 382 kgs of rock, they all are the humble evidence of undoubtedly the most colossal enterprise ever taken by one nation to explore new territory. The sheer magnitude of resources devoted to the Apollo program was staggering, and it is useful to remember this, and to compare it with the Constellation program, to get a better view of the Artemis program.

In just twelve years, between 1961 and 1973, the US committed $150bn (in today’s dollars) to the space program, assigning to NASA at some point a phenomenal 4.5% of the total federal budget. The Apollo program employed 400,000 people and involved the support of some 20,000 companies and universities. Compare those numbers with the current ones. These days, NASA’s annual budget of $20bn corresponds to 0.4% of the federal budget and employs less than 18,000 people. Its most ambitious project completed recently is the International Space Station, the most expensive structure ever built, for which NASA spent half of what it spent on Apollo, and over 30 years.

Going to the Moon was a top priority of president John F. Kennedy, who became the champion of the Apollo program.  Not only he followed the progress of the project carefully, but he also rallied the popular support that was critical to ensure that Congress would approve the massive funds that were going to a dangerous enterprise. His historic speech of 1962, “We choose to go to the Moon”, is not a piece of clever marketing but rather a passionate call to arms, not only to Americans but to the whole humankind. The administrations of presidents Lyndon B. Johnson and Richard Nixon also supported the quest to the Moon vigorously, but Mr Kennedy remained as the inspirational figure that moved all those involved in the Apollo program to fulfil his dream of “achieving the goal, before this decade is out, of landing a man on the Moon and returning him safely to the Earth.” 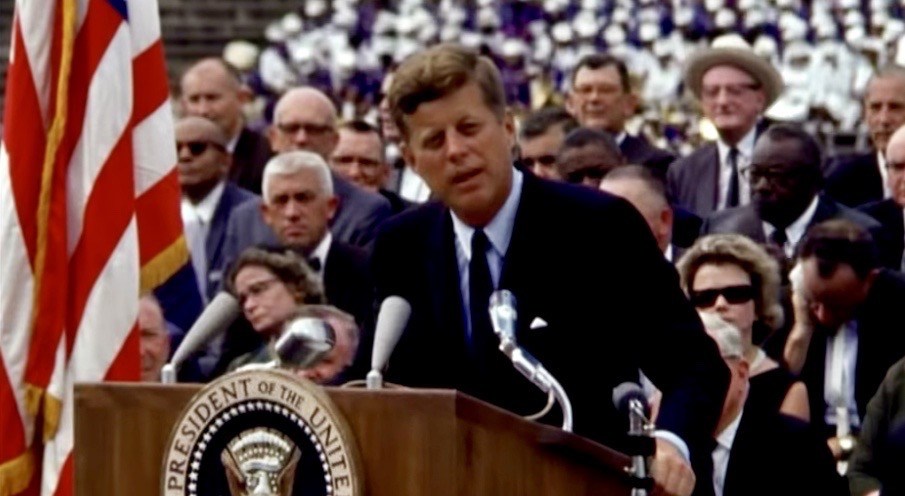 Fuelling these noble dreams was the spectre of the Cold War, which gives the context needed to understand why such extraordinary adventure was ever attempted. The point of going to the Moon was never really about setting a permanent presence there, but rather beating the soviets. Not many people know this piece of trivia, but on July 21, 1969, there were two vehicles on the Moon that have just arrived from Earth, not just one. The one that everyone remembers is the Apollo Lunar Module, which landed with a bit of trouble but safely, carrying the two American astronauts. The other was Luna 15, an unmanned Soviet spacecraft with the mission of extracting and retrieving lunar soil, but that crashed on the Moon in the landing manoeuvring. That snapshot, of American astronauts moonwalking while 560 kilometres away from them a soviet robot was losing control and crashing, captures perfectly the moment in which the US won the space race. With such a show of power, there was no further need to make the point that the US was in a higher ground than the Soviet Union, in terms of technology and economic muscle. One doesn’t need to keep running after crossing the finishing line.

The Twin Sister That Not Many Will Love

Artemis might be the twin sister of Apollo, but that doesn’t mean that she will be as beloved as his brother, or that she can count with the same resources that he had. Though you might expect that the technological progress made over the last fifty years have reduced the costs associated to the venture of going to Moon, the reality is that it is still a tremendously expensive and risky project. NASA administrator, Jim Bridenstine, provided an estimate of between $20 billion and $30 billion that would be needed over the next five years to fund Artemis, on top of the current budget.  This extra funding would represent an increase of 20-30% increase of NASA budget, the most significant hike on NASA’s funding since the late 1980s. And that is assuming that the figures provided by Mr Bridenstine are correct, but most likely they are not, as this type of massive infrastructure projects always misses the initial cost estimate by a mile. Take for example the case of the Constellation Program, of which I wrote on my previous entry, or the Hubble Space Telescope, which had an estimated cost of $400 million but ended up costing $4.7 billion when it was launch. A more realistic price for Artemis, with the timeline demanded by Mr Pence, is in the range of $50 billion to $75 billion.

The question is then, will the Trump administration throw its weight behind such a project? The big infrastructure project that is in the mind and heart of Mr Trump is the wall in the border with Mexico, which has a price tag of $25 billion, the same alleged cost of Artemis. Between the wall and a trip to the Moon, which one do you think that Mr Trump prefers to see completed in the next few years? Perhaps more importantly, which one do you think Mr Trump voters would prefer to see completed?

I don’t see this administration bringing together the political support that is required to go back to the Moon. Congress has displayed an excellent capacity to pushback many of the initiatives coming from the White House, and this will be a real impediment at every step of the way over the next five years. Two weeks ago, NASA requested a minimal increase in its budget for 2020, just $1.6 billions, and it already left lawmakers scratching their heads, figuring out whether it is a realistic amount, and how it fits with the rest of the plan. “We have a White House directive to land humans on the Moon in five years, but no plan, and no budget details on how to do so” Rep. Kendra Horn, the chair of the House subcommittee on space and aeronautics, said during the hearing. The decision about this initial increase in the budget will give us a good idea of how things will go in the next few years for Artemis.

And all this is assuming that the status quo is preserved and that Mr Trump remains in office for another four years (as I think he will). In the fortuitous case that Democrats manage to remove Mr Trump from the White House, it would be very likely that Artemis will be shut down, just as it happened with Constellation ten years before. Does anyone see Joe Biden, or Elizabeth Warren, or Bernie Sanders, supporting what they surely consider is just a vanity project of Mr Trump?

Mr Pence, and the people that had the idea of setting 2024 as the deadline for Artemis want to provide the illusion that the US went back in time to revive its old glories, and probably they can pull that magic even if they don’t land one single person on the Moon. As with many other initiatives of this administration, Artemis feels more like a shallow exercise for Mr Trump to show his defiance, rather than the carefully planned effort to lay down the foundations of a long, sustained space program. The tight deadline is just an admission that they are doing all this for their glory and that they don’t care to project it over the closed borders of the Republican party. Even if they don’t land on the Moon, they will have the pictures of a few rocket launches to brag about.

You could argue that this renewed plan to go the Moon has the potential to inspire a generation, and unite the US behind a higher, nobler dream. But does anyone think that Mr Trump is remotely interested in igniting some interest in science, innovation or technology among his younger compatriots? Does anyone believe that the same person that says without blushing that global warming is a hoax created by the Chinese really cares about expanding our understanding of the solar system? That the same mind that conceives that the Moon is part of Mars is really interested in the mysteries of cosmos?

So, in terms of money and inspiration, the Artemis project reminds me more to the failed Constellation program of Mr Bush than the Apollo program of Mr Kennedy. But, what about the background of war that fuelled Apollo? The US might not be at the moment in a major conflict with another power (though I might have to rewrite this in a few weeks, depending on how things progress with Iran), but that does not mean that Mr Trump is not at war. Mr Trump is engulfed in a vicious war with half of the country, that half that he despises and for which he only shows contempt and disgust.  His language, his tactics, his mindset, they all are those of someone who wants to destroy an opponent, in this case, that part of the country that thinks differently than him.

America is at war with itself, and as such Artemis is not a project that seeks to unite the country behind the same goal but rather another piece in Mr Trump strategy to show that there is only one way of doing things. His intention is not to show to the Chinese, or to the Russians, or to the Iranians, how powerful America is, but to show to the other half of the country, how strong his half is. But as Apollo showed, you need the full country, not half of it, to accomplish great things. And reaching to the Moon, and later Mars, and then the stars, most surely will require not a fraction of the population but all the humankind.