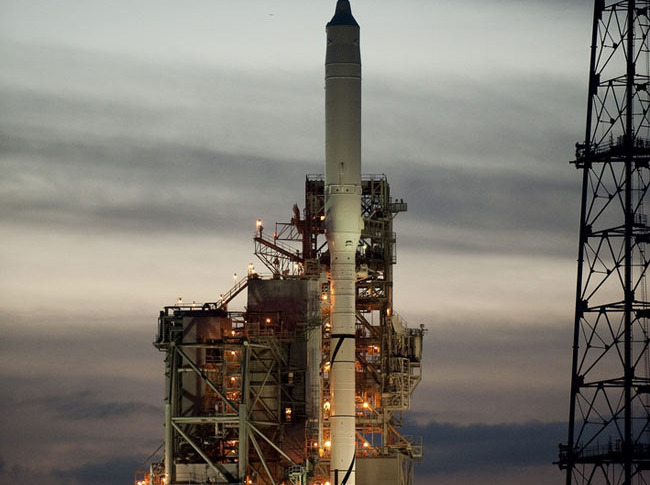 T-5 Years: America’s dubious countdown to go back to the Moon (Part 1)

The first of my Ten Predictions for Space Exploration in the 21st Century that I wrote last January was “All predictions will miss their deadlines”. My observation then was that a recurrent theme of space missions over the previous decades had been that of missing their objectives by years or even decades – the only noticeable exception being the Apollo program – and that one should be cautious about deadlines when thinking about space exploration. Now that the most ambitious deadline in 50 years has been set to the American space program, I am ready to doubling-down on my prediction: NASA won’t land humans in the Moon by 2024, as the agency recently promised.

Read my previous entry: Ten Predictions for Space Exploration in the 21st Century.

In this entry, I will give a summary of how NASA ended up aiming for the Moon again, and next week I will give my own views of why I am pessimistic about their current program.

The Demise of Constellation

Let me start with some context. Fifteen years ago, during the presidency of George W. Bush, the Constellation program was born as the next phase of NASA’s space exploration efforts, after the completion of the International Space Station and the imminent retirement of the Space Shuttle. Its ambitious goal was to return to the Moon no later than 2020, for which it would require the development of a new series of vehicles, specially designed for deep space missions: the Ares I and Ares V boosters (the first one used for the spacecraft and the second one for cargo), the Orion spacecraft (which would take the astronauts from the Earth to the Moon orbit), and the Altair lunar lander (which would be used to descend from the orbit of the Moon to its surface).

It is difficult to know how important was the Constellation program to the Bush administration, embroiled in the sordid wars in Afghanistan and Iraq, but it would be hard to argue that it was a high priority. Although NASA’s administrator at the time, Michael Griffin, described Constellation as “Apollo on steroids”, the government didn’t match the lofty ambition with the funds that were needed to put humans back in the Moon. Instead of increasing NASA’s budget, the government expected the agency to do some financial juggling, redirect funds from other programs to Constellation, a manoeuvre that was stopped by Congress and left the program continually running over budget.

In 2009, the newly elected President Barack Obama instituted the independent Augustine Commission, with the task of reviewing the human spaceflight plans of the United States. What the commission found was that, though the progress of Ares and Orion was underway, it was already running three years behind schedule with a cost overrun of $3 billion over the original $9 billion planned for the first five years. More worrisome, however, was that for the period 2010-2014, the program would require a budget of $29 billion and no hint that the Ares V would be part of the development. All this meant that the main booster would not be ready until the late 2020s and that the lunar landing vehicle wouldn’t be available “until well into the 2030s, if ever”, as noted in the final report.

With this dim outlook, Mr Obama removed Constellation out of NASA budget, effectively shutting it down. If his predecessor had not bothered to back his own grandiose idea, why should he get in that mess? The government set out to dismember the project, recycling its various pieces for other purposes, and switched to the idea of sending astronauts to an asteroid by 2025: The dream of going back to the Moon ended up again in a drawer, as it had happened a few times before.

Fast-forward to 2017, and you find President Donald Trump in the process of reverting or cancelling as many policies of the previous administration as he can. The space program was no exception, and in December of that year, Mr Trump signed an executive order with the express aim of redirecting the efforts of NASA to the exploration of the Moon and Mars. This announcement made the news for a day but didn’t divert attention away from the avalanche of scandalous headlines coming from the White House those days. For the third time in less than fifteen years, NASA embarked itself in what it was a new top priority, setting up an unnamed program based on the dusty blueprints of Constellation.

The new design resembles closely its predecessor, consisting of the Space Launch System (SLS), a reincarnation of the Ares V booster, and a revamped Orion module. Perhaps the main difference with Constellation is a space station in lunar orbit, named Gateway, which will operate as a hub for docking the Orion spacecraft and a lunar lander that remains to be designed. Boeing, the main contractor for the development of the SLS, announced that the main booster would be ready by 2030, making NASA believe that, perhaps with some luck, they could get back to the Moon even a couple of years earlier, setting 2028 as the informal deadline.

Everything changed last March, when Vice President Mike Pence, delivering a speech to the National Space Council, revealed the new expectations of the current administration regarding the space program: NASA should put American astronauts on the surface of the Moon no later than 2024. Scolding the troops of engineers and scientists for the 2028 deadline, Mr Pence was emphatic: “Ladies and gentlemen, that is just not good enough!”. He then proceeded to set out the tone of how things should be from now one, advising that “urgency must be our watchword”, and that the deadline should be met “by any means necessary”. Targeting the undisciplined contractors, he warned: “If commercial rockets are the only way to get American astronauts to the Moon in the next five years, then commercial rockets it will be”.

Following such reprimand, NASA pushed its modest program through an extreme makeover. In what has to be one of the most inspired moments in marketing, someone realised that in the Greek mythology Apollo had a twin sister, Artemis, who happened to be the goddess of the Moon, and now thanks to the skilful hands of some creative agency, it would be the ridiculously perfect name for the mission that would send a woman to the Moon for the first time ever. Just right on time for the 50th anniversary of the Neil Armstrong’s feat, NASA revealed with great fanfare the rebranded program encapsulated in a more significant, more inspiring theme: The Artemis Generation. Last week, NASA uploaded a short clip about it, and it feels like the trailer of an upcoming blockbuster, bringing together all-time legends of space exploration, like Gene Kranz, and the younger generations of astronauts. I am neither American nor a millennial, but got goosebumps when hearing the simple but effective slogan “We Go!” It is brilliant; check it out if you haven’t seen it yet.

Unfortunately, other than the new image and some reshuffling of the top brass at NASA, there is nothing new that can help you understand how they are going to meet the over-ambitious deadline. Five years seems like just enough time for Paris to organise the Summer Olympics of 2024, but certainly not for the US to pull the most strenuous expedition ever imagined by humans.

Even for the standards of an administration characterised by haphazard planning and chaotic execution, the deadline of the Artemis program seems to defy all logic. That is until you realise with some trepidation that, if the plans of the Republicans come to fruition, 2024 will be the last year of Mr Trump’s second period in the White House.

You understand then what the game is all about.