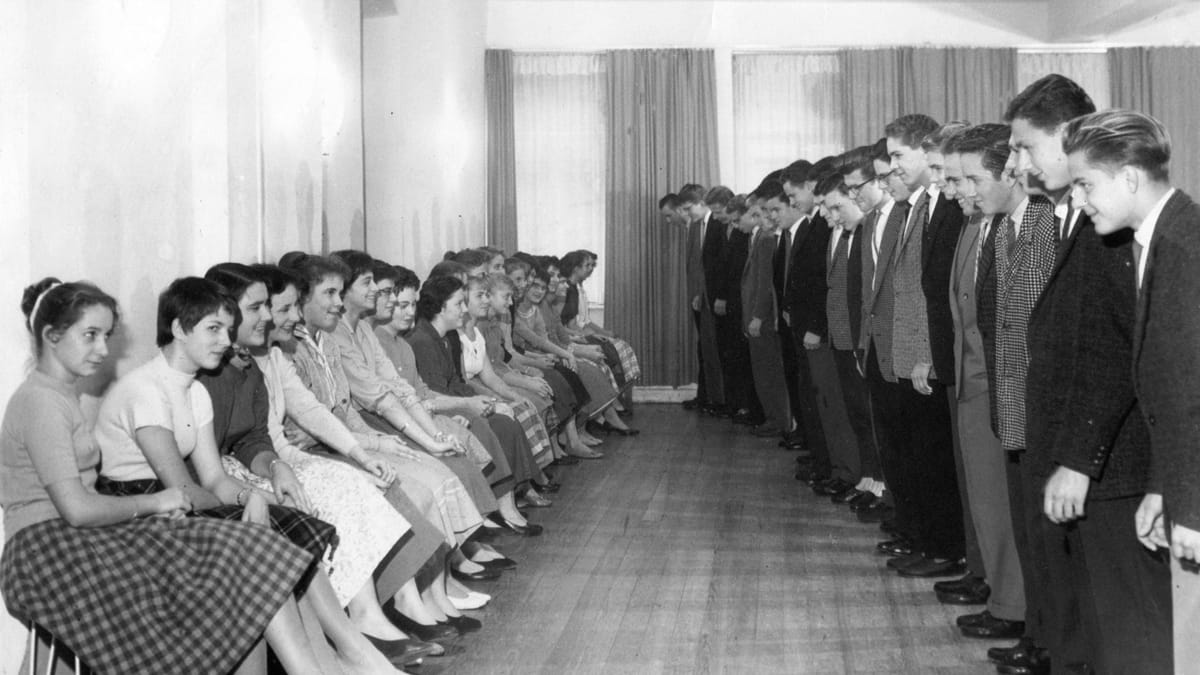 For those outside Colombia, let me explain the tongue-in-cheek expression “paseo bugueño”, which might translate as “going on a trip to Buga”: It refers to those situations in a social setting where men and women end up in two separate groups, physically apart one from the other. This funny distribution might arise spontaneously, perhaps from the nature of the conversation, so it typically causes some laughs when someone asks, “How did we end up in a paseo bugueño?”

My only hypothesis about the origins of the expression is that at some point in the distant past, teenagers going on a school trip to the city of Buga, to see the beautiful Basilica of the Lord of the Miracles, were separated in two groups of boys and girls to make sure that they would behave appropriately in a holy place, not falling into temptation of flirting with the opposite sex while away from home.

Earlier this month Bloomberg ran a story on how senior male executives in Wall Street have responded to the  Me Too movement by implementing a personal, non-official paseo bugueño policy in the workplace. The specifics are varied, but they all have the common strategy of avoiding interaction with women in settings that might be misconstrued. One-to-one meetings with women are avoided, and if they must happen they are held in public spaces or in offices with glass walls (a better option is to arrange them with someone else that can serve as a “witness”). When travelling on business, book separated seats on flights and rooms in different floors in hotels. Drinks or dinners with women after work are a big no-no.

Physical divides between men and women can be found in places of worship of various religions, like in some synagogues having mechitzot or in mosques that have specific ladies’ prayer halls. Some male evangelical Protestants use a strict rule of not spending time alone with women they are not married to, and though this practice goes back to the 1940’s it is now referred as the “Mike Pence rule”, named after the current American Vice President who said in an interview in 2002 that he never dines alone with any woman other than his wife.

Extracting this practice out of a religious context and into the work environment isn’t something new either. I remember a professor in the university I attended in Colombia many years ago who always kept the door open when a female student was in his office (not something he would necessarily do with a male student). What is new is the prominence of the people doing it, and the widespread view that this might be a good way of avoiding being falsely accused of any wrongdoing. After the story was reported in Bloomberg, I have heard many people finding some logic to the practice, pointing out that not only you need to be righteous but you also need to appear to be so.

A lot has been written about how this practice is damaging for women, as it denies them of the opportunity of playing at the same level with their male colleagues, for example blocking them from the possibility of being mentored by senior managers. Denying women from the rich interaction that happens within and around the work environment puts further breaks to their career growth, perpetuating the boys’ club culture of some heavily male-dominated industries. It can even be illegal, as you can’t show any form of favoritism simply on the grounds of gender.

I have found in various articles about this topic that “men are cowards” is the most frequent explanation of why some of them are opting to avoid women completely. Reality might be more complex, and I think there is a powerful element at play here that hasn’t been properly considered to explain the phenomenon: trust.

I only started paying attention to the problem of trust a few months ago when I attended a talk given by Rachel Botsman on this topic. Her book “Who Can You Trust? How Technology Brought US Together and Why It Might Drive Us Apart” is a fantastic read, focusing on the many paradoxes that appear in the shared economy and the role that technology has played in re-distributing trust from formal institutions to complete strangers.  Airbnb, Uber, the Chinese “Social Credit System”, and blockchain, all of them make an appearance in this captivating book.

Though the focus of Ms. Botsman’s work is in the interaction between trust and technology, you can use her theory to deconstruct other problems where trust is the key ingredient. She defines trust as “a confident relationship to the unknown”, and in the context of men fearing women making false claims about their behavior, the unknown is the uncertainty of damage to their reputation, something known as reputational risk.

The disturbance in that “confident relationship” between men and women comes from a generalized perception that false accusations of sexual harassment have spiked since the #MeToo exploded last year. It is difficult to get hard numbers about any of this, but it seems to me that accusations are in fact quite low to begin with. The number of anecdotes that you may have heard of women that have been harassed in the workplace but decided not to take action (as it is usually an extremely stressful process that might backfire badly) surely is orders of magnitude larger than the number of anecdotes you know of falsely accused men. Chances that you didn’t do anything wrong but still got accused of wrongdoing must be then quite small. Of course the risk is not zero, but on regular basis you are probably taking higher risks with your reputation without the unwanted consequences that you cause by discriminating the very same women you are working with.

Perhaps the observation of Ms. Botsman that is most relevant for the men/women separation problem is her most provoking one about trust: Transparency is not they way to build it. This sounds quite counterintuitive but is in perfect agreement with her definition of having a “confident relationship with the unknown”. The fallacy that transparency will help us to build more trust doesn’t recognize the intrinsic nature of uncertainty in the relationship between the agents. Transparency might give us the illusion of more knowledge but in reality it diminishes our capability to make that leap of faith that we all need to make in order to have a normal, healthy relation of any kind. Anyone that thought that sharing email passwords with their partners was a good idea, probably knows by now that crazy-levels of transparency are not the right way of strengthening the trust in the relationship.

I believe that most men are not evil, or cowards, or sexual predators (we are a bit stupid from time to time, though). I also believe that most of us would like to enjoy a great atmosphere at work, doing amazing things side by side with our female colleagues, strengthening the bonds that you can only create when you spend 50+ hours a week with someone pushing a project or solving a problem. But I also believe that many men are thinking that by making the workplace a “paseo bugueño” they are becoming completely transparent, without realizing that by doing so they are undermining the trust that they should be cultivating in the first place.