Predicting The Tragedy: Some Forecasts Of Violence In Colombia

Rodrigo Uprimny, scrutinising the methodology used by the Colombian government to conclude that the number of homicides of social leaders has decreased over the last year, wrote the following: “A single violent death of a social leader is unacceptable, and that is what makes so unfortunate to discuss the accuracy of their homicide rates, since the numerical debate can conceal the human tragedy behind each homicide.” Three years ago, I had the same feeling when I was estimating the potential impact that a deal with the FARC guerrilla could have in Colombia’s violence, specifically in the number of homicides. At the time, I thought that such “numerical debate” was a gross simplification of the horror that afflicts the lives of thousands of people. When I shared the progress of my results on Facebook, I did it with shame, almost excusing myself for having the boldness to project the violence of the country in cold numerical calculations.

This entry is the continuation of the one I wrote last week: The Seed of Doubt: The Impact of the Deal with FARC in Colombia’s Violence. If you have not done so, you may want to read that first.

Three years later, I feel the exact opposite. Violence in Colombia is a subject that is often discussed with many empty and ambiguous words but rarely with hard numbers. However, the magnitude of Colombia’s social tragedy is such that it fits better the realm of statistics than that of lyricism. Any person who is touched by the violence in Colombia necessarily has to make an effort to understand the numbers that describe it because these are the only ones that can give an adequate perspective about its victims. Opposite to what I thought three years ago, the numerical debate on this issue is not optional. Refusing to see and understand these figures is the most cunning way to ignore the human tragedy in which we are living.

In the summer of 2016, I was frustrated that I could not find any references to proper estimations of Colombia’s violence, in the scenario that the government could strike a peace agreement with FARC. After weeks of futile attempts to get any information about it, I decided to make my own calculations, which lead me to arrive at my own conclusions. In this post, I want to share these results again, and in a later one, I will contextualise the events of the past three years to gain a better perspective of the future.

The following figure shows the historical number of homicides in Colombia, from 1990 to 2015, and the projections under the two scenarios that we were considering in 2016: with a government-FARC deal (i.e., “without conflict”, in green line) and without it (i.e., “with conflict”, in red line). Below I will explain more carefully the assumptions of both scenarios, but surely the reader may have an intuitive idea of what each of them involves. (I calculated these projections in August and September 2016.)

How accurate were these estimates? My calculation showed that if the deal were accepted, there would be a cumulative 36,449 homicides in Colombia between 2016 and 2018. This figure was not far from the numbers that were reported for those three years by Medicina Legal (35,035 murders, i.e., I overestimated in 4%) and the Ministry of Defense (37,562 homicides, i.e., I underestimated in 3%). The following table shows the numbers in detail in each year, and you can see that my estimates range between those reported by both sources.

The data is the fuel of any predictive model, and for the analysis of violence in Colombia, several sources are available online, although that often involves manually typing reports in PDF format. I obtained the numbers from Medicina Legal, the Ministry of Defense, the Single Registry of Victims (Registro Unico de Victimas), the National Police, Centro Nacional de Memoria Historica, and DANE.

The most difficult data to obtain were those of civilian deaths due to the conflict. The Ministry of Defense, for example, has separate counts of combatants and civilians since 2003 but does not split civilians between those who died in the conflict and those who did not. After looking for this information everywhere, I decided to write to the Centro de Memoria Historica asking for it, though I had little faith I would get a reply. I was amazed a couple of weeks later when I got an email from them, with a complete table of civilians’ homicides due to the conflict, dating back to 1958. 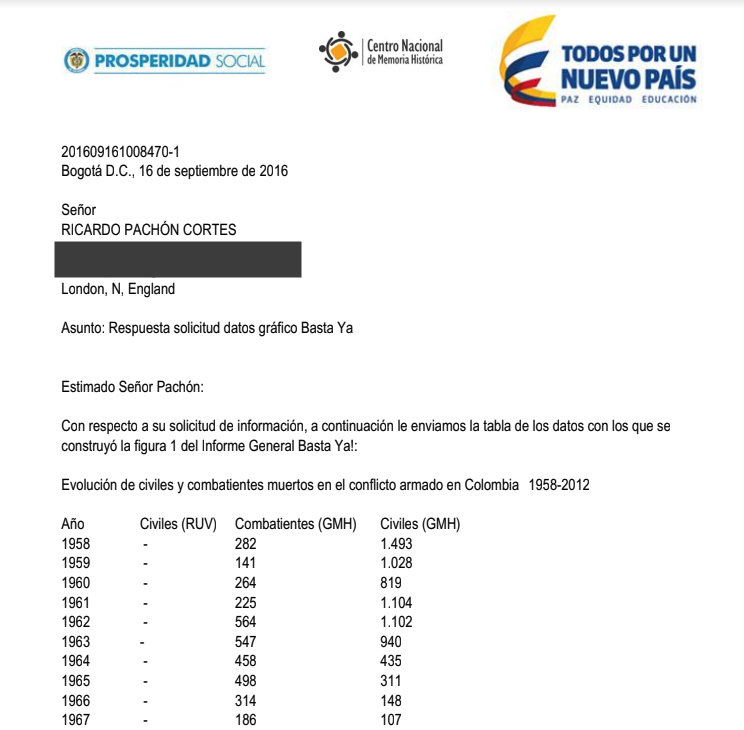 To make the projections, I built the series of total homicides by weighing several sources (black line in the following graph), and then another of what would be the deaths due to the conflict (red line), in which I included both combatants and civilians. With those two time series, I built a third, which would reflect the killings outside the conflict (green line).

To project the “without conflict” scenario, I extrapolated a logarithmic regression of the previous 15 years of that third time series (green line) into the future. And for the “with conflict” scenario, I took the “without conflict” projection and included a multiplicative factor proportional to the rate of deaths due to the conflict, assuming an increasing trend that would mirror the decreasing trend that it has had until 2015.

The original goal of this project was to analyse better the 2016 agreement with FARC. I will discuss my interpretation on that specific point in my next post; however, something makes me think that, at least during the next decade, a tool like the one I just discussed will be fundamental in structuring ideas of what is happening in Colombia. With that in mind, I can recognise some flaws that I need to fix, and some elements to improve.

My model does not assume any feedback mechanisms from violence, though there is evidence that it typically amplifies and spreads to regions closer to crime hubs. I also think it would be much more useful (although perhaps not much more precise) a “bottom-up” approach, to model violence at a local level, in municipalities for example, and then aggregating them to the country level. Such a model would allow incorporating more precisely the various drivers of violence, such as the proximity to areas of coca cultivation, or geographical characteristics, such as being a border area with Venezuela. The problem of developing such a model is the lack of data; however, it may be possible to analyse some specific departments in such that way.

There are other technicalities that I must improve (for example, it is not appropriate to calculate the total number of deaths without normalising the total population) and, at some point, I will describe in more detail all the calculations I made. As I said before, the key to the success of any prediction model is to have access to high-quality databases, which are adequately curated and documented. I have not been able to find them easily, so I also want to publish the data that I have been able to collect so that it can be useful to others.

Why has nobody else done it?

To this day, I have not been able to find references on projections of violence in Colombia, or literature on how it could be modelled under different assumptions. I guess (or rather, I hope) that such models exist within government ministries and directorates that are on the front line of defence. I also imagine that there must be academics who have done this task for a long time; however, I have not been able to find the right sources.

I do not work for the government, nor am I an academic, and my speciality is mathematics, not criminology, nor sociology, not even economics. That is why I can give myself the liberty to do some calculations and make them public because, in the end, neither my reputation nor my job stability depends on this. However, for a director of a government entity, making a forecast on violence perhaps can bring more problems than benefits if they turn out to be wrong.

Or perhaps not. The only forecast I have ever read about homicides in Colombia was the statement made in July 2015 by the Minister of Defense of that time, Luis Carlos Villegas, who said that “at the end of 2018 [the homicide rate in Colombia] must be 19 per 100 thousand inhabitants, that is, 9 points less than [in 2015]”. That is, for 2018 the minister estimated that the number of homicides would be a little higher than 8,500 when in fact they were more than 12 thousand. The minister underestimated the murders by 30%, but nobody remembers that.

As Yogi Berra said, “making predictions is difficult, especially about the future”. But that difficulty cannot stop us in the task of obtaining a more complete and useful vision of the great tragedy that Colombia has been dragging for decades.

In the next post I give my own interpretation about these results: The “Peace” Deal that Does Not Bring Peace.