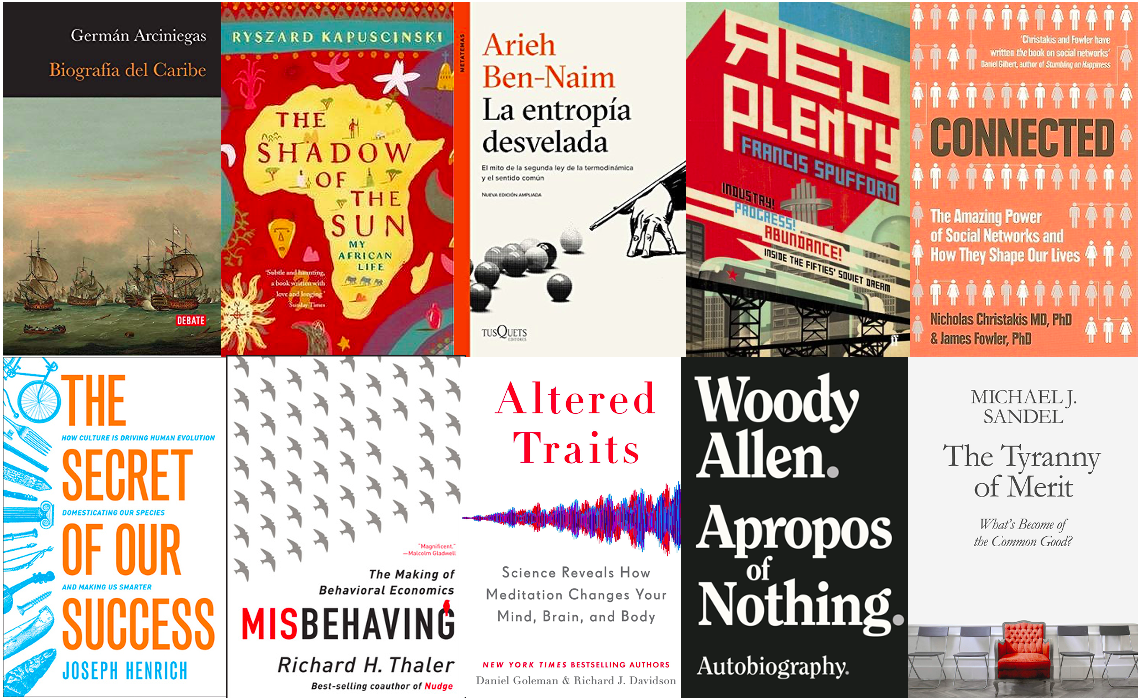 Here is the list of the ten books I read last year that I liked the most, ordered by publication year.

The following are three special mentions.

A book recommended to any reader: The Shadow of the Sun, by Ryszard Kapuściński (1998).

Kapuściński is not an intellectual, he is a journalist and adventurer. He risks his life in the war in Angola or a revolt in Zanzibar, all just to get a story for the Polska Agencja Prasowa, the Polish press agency for which he works. But his observations of society are insightful, modern, and compassionate. Then he goes and writes them in books like this one, with immaculate prose, which, when you read them, make you realize that both his life and his writings are both works of art.

I have three reasons to believe that this is a book that any reader will enjoy:

Kapuściński is part of that long and illustrious line of journalists-writers, perhaps the best writers of all. And I wonder: Who are the Ernest Heminway, Gabriel Garcia Marquez, Truman Capote and Ryszard Kapuściński of our times? I imagine there must be many, but I am ignorant on the matter.

For now, I have a purpose for 2022: Read everything I can from Kapuściński.

A book that changed a personal conviction: The Secret of Our Success, by Joseph Heinrich (2015)

The Secret of our Success profoundly changed my way of conceiving intelligence. Specifically, it made me realize that the following three preconceptions I had were wrong:

In cognitive tests comparing the performance of human infants and chimpanzees of comparable age, it has been shown that the former are not exceptionally better than the latter. Even in several of these tests, the chimpanzees can memorize or find patterns more quickly and with greater accuracy.

This is a tremendous revelation. I thought there was a gigantic and insurmountable chasm between the cognitive abilities of humans and those of other animals. But if instead we are just slightly positioned toward one end of a continuum, what is it that has made humans the dominant species on the planet?

The answer is culture. Our ability to pass on knowledge from one generation to the next gives us an extra edge when it comes to surviving and expanding our domain. After two million years of doing this exercise, the accumulation effect that we have achieved is phenomenal.

And perhaps most impressive is learning that our cultural evolution has impacted our own biology. By transmitting knowledge, we have transformed our environment, and our bodies adapt to make the whole process more efficient. I thought it took hundreds of thousands of years, maybe millions, to see these biological transformations. But for example, there is evidence of modifications that have occurred even at the genetic level produced by the agricultural revolution only 12 thousand years ago.

The Secret of our Success is one of the most influential books I have ever read, and I thank my friend Hugo Díaz for this recommendation. The book is not difficult to read, but it may be a bit technical for some people or a bit boring for those who do not find compelling anthropological descriptions of Eskimo tribes. However, it is a wonderful book to be discussed, one that opens up endless questions about the essence of intelligence and ourselves.

A book that had a direct impact on my life: Altered Traits, by Daniel Goleman and Richard J. Davidson (2017)

One of the habits I have tried to cultivate over the last few years is meditation. But as I wrote a little over a year ago, there was always a roadblock that collapsed all my efforts to maintain that routine, resulting in inconsistent meditation practice. Everything changed almost five months ago when I finally read Altered Traits by Daniel Goleman and Richard Davidson.

Read my post about my struggle keeping habits: The Avalanche that Collapses your Habits.

The practice of meditation is part of our traditional knowledge, that is, that knowledge that local communities have collected over thousands of years and precedes the scientific revolution. In the case of meditation, some archaeologists have suggested that it has been practised for more than 7 thousand years in various parts of Asia.

Read my post about traditional knowledge vs scientific knowledge: Indigenes vs Scientists.

However, since the late 1970s, meditation has been the subject of scientific study by a growing group of neurologists and psychologists, who have found solid evidence of the benefits of this practice. Altered Straits brings together scientific research findings on meditation obtained with studies conducted with the highest standards. Its benefits are collected in four groups:

The degree to which these benefits manifest themselves is determined by the number of hours spent in the practice. Sure, “professional meditators” like Tibetan yogis, who can have 20,000 hours or more of training, manage to exhibit physiological changes in their brains and differentiated profiles of stress, concentration, and even pain tolerance. However, what transformed my perception of meditation was learning that even amateur meditators like myself can already reap some of these benefits with a couple of hundred hours of practice.

Finding this connection between meditation and its empirical benefits, validated by the scientific method, turned my practice upside down. I am now clear about the importance of extending the hours I dedicate to meditating and the benefits that I want to integrate into my life. Inspired by the book, I now find myself modifying my meditation sessions, making them longer, deeper, and more sustainable.

Although this book has been so influential to me, I recognize that it is not one that I would recommend to every person interested in meditation. I know that not all people will find studies published in peer-reviewed journals fascinating, and their motivation to meditate will come better elsewhere. But for those like me who need a bit of scientific evidence to decide to do something, Altered Traits is an excellent reference, one that can surely change their lives.