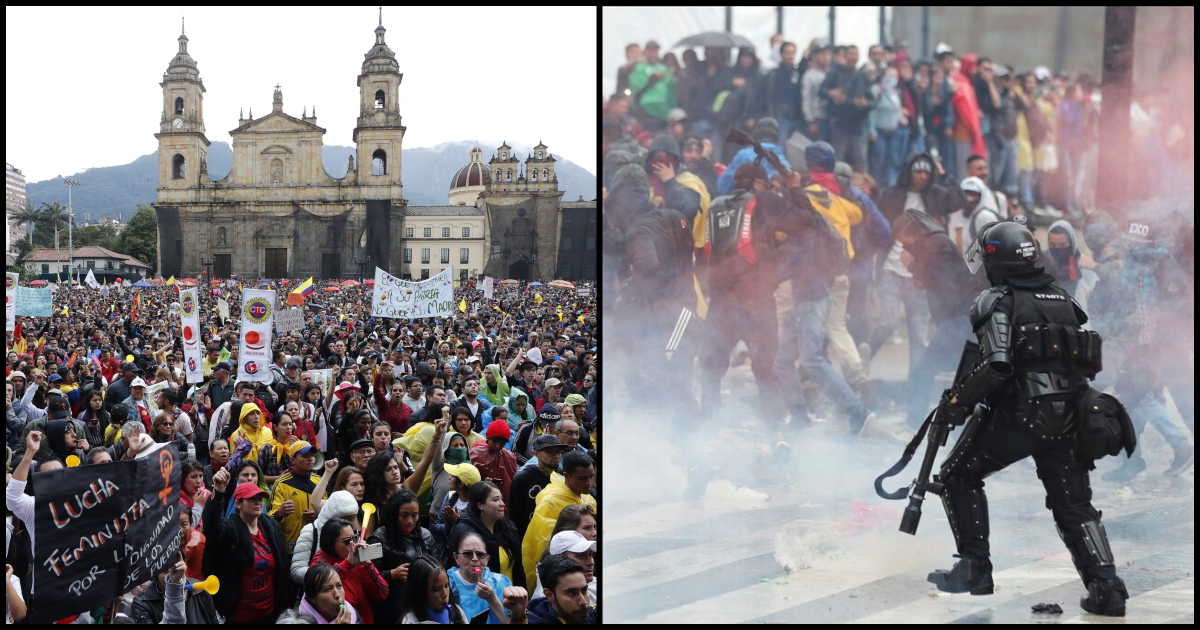 The Protest and the Riot

Events of the last 72 hours in Colombia revolve around three fundamental groups of characters:

One might think that those on Thursday and those on Saturday have nothing in common, but the truth is that they coincide on at least three points:

That protesting is legitimate.
That violence is not acceptable.
That Friday’s are the minority.

Having pointed out these three points, which are somewhat trivial, I want to point out another one, equally trivial, but that perhaps many are forgetting: And it is that if Thursday’s are really serious about their objectives, they will have to start to feel more comfortable with events such as those on Friday and the recriminations of those on Saturday.

The protests that rocked Colombia cover a wide range of claims that will in no way be resolved after a day of marches. Chile, which is setting the standard for how to do these things, teaches us that what we are talking about is months of sustained action and high impact. That means if protesters are convinced that the crucial time has come to re-found the Republic, or at least remove the current government, this is just the beginning, and what happened this week will have to be repeated over and over again.

The essence of the mobilization in Colombia is peaceful, but that does not mean that its promoters can prevent the violence that can be unleashed when hundreds of thousands of people take to the streets with the intention of bringing down rigid and ancient social structures. The protesters are not homogeneous neither in their forms nor in their requests, and rather form a continuum that ranges from pacifists who were doing meditation during the protest, to the lovers of the crowd.

I am sure that we can find examples all over the world of mobilizations that have been relatively peaceful and that have not gotten out of control, but judging by recent examples from neighboring countries, it is not unreasonable to think that a wave of protests of great magnitude in Colombia is accompanied by violence. Criminal structures of all sizes operate in our country, from gangs made up of a handful of criminals, to armies with territorial dominance. Would it really surprise us if some of these groups can find fertile ground for their actions amid the chaos that the protests bring? Sure, the state should guarantee security at all times but (and I hope the irony doesn’t escape them) this protection comes from the same government that the protesters are trying to remove as incompetent.

Those who went out to protest have sought to distance themselves from the violent: they are the ones on Thursday, not the ones on Friday. However, in their desire not to be joined by the vandals, they have fallen into the trap of imagining that the movement is of angelic purity, and that it is fundamentally incompatible with violence. It only took a couple of confusing videos and the magic of social media to amplify a message of denial about everything that happened on Friday. They seem to say “The movement is spotless, everything that happened was a montage.” But thinking this way is a blunder, because such naivete creates a blind spot where they can cause terrible harm to themselves and others.

Going out to protest in these times, and with such ambitious demands, is not a small matter, and therefore minimal responsibilities must be assumed that do not evaporate simply by saying “I go out and condemn violence.” It is essential to recognize that these actions are assuming risks, and one of them is the occurrence of disasters like the ones we saw this week in Colombia, or throughout the last months in other countries in the region.

The valuable thing in recognizing that you are taking a risk is that you can put the reward you are looking for into perspective, and this gives dynamism and determination to the actions that follow. For example, a protester can calculate that the risk of opening space for the violent is small but that instead the possible social changes are enormous, and therefore it must be accepted that although there may be damage, they are collateral. There will be another who sees that the price to be paid for moving forward is too high and decides not to participate in the protest. And there will be others who understand that there is definitely a risk of agitating the masses, but decide to seek to minimize it as much as possible.

We have been here all year in England with the actions of the Extinction Rebellion, an environmental movement that enacts civil disobedience to force the government to take action on climate change. The actions taken by the ER are illegal, because they manage to collapse the normal functioning of the cities for hours, and several of its activists have ended up in prison. One can think what they want from the ER, but what one can not complain about is that they do not have perfect clarity of the risks they assume with their actions, of the impact they have on others – especially those who do not part of the movement – and the price they are willing to pay to get their agenda out. All this is perfectly recorded in his booklet “This is Not a Drill”, in which not only do they cover reflections on ethical and economic aspects of environmentalism, but also practical points on how to organize a protest and what to do in case of being arrested.

Colombians have a complex relationship with violence because we have been submerged in it for decades. A passing suggestion of being a facilitator produces immediate and energetic rejection – it’s understandable. But if those who went out to protest in Colombia are realistic and are convinced that this is the opportunity they were waiting to restart the country, they also have to understand that there are violent factions that want to take advantage of the moment. Deciding whether or not this is sufficient reason to discourage you from exercising your right to protest is a personal calculation. What one can not do, in any way, is cover your eyes and ignore that any of our acts (and especially those that seek to change the status quo) produce waves that spread throughout the social fabric.

The specific events on Thursday, Friday, and Saturday are significant but not important in the long term. The history of Colombia did not split in two after the days of protest, violence and reproach. What really matters is what is coming in the coming weeks. The president has already called a national dialogue, which will most certainly leave everyone unsatisfied, even before they sit down at the table. A next day of protest is in everyone’s calculations. With the information that we have, what remains is for each one to decide what their next action will be when we are summoned again to take to the streets.