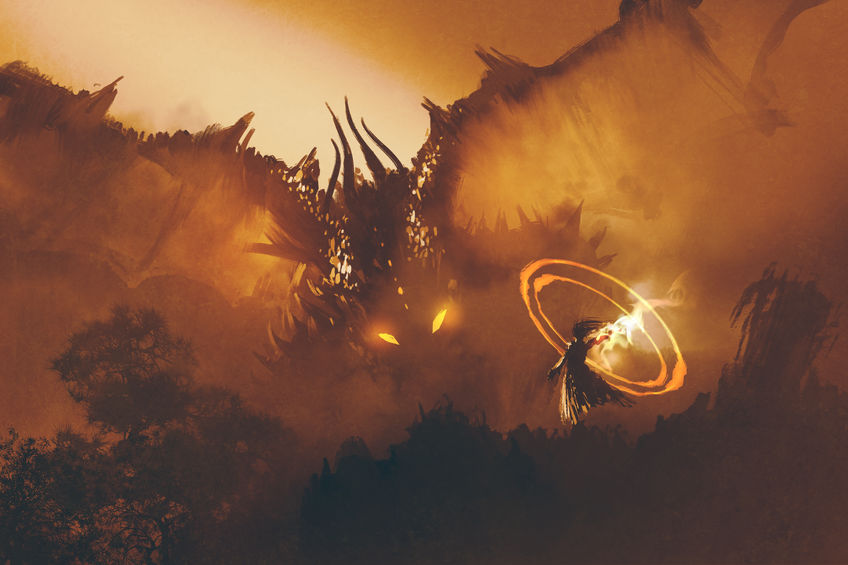 In Search of Dungeons and Dragons

Observations May 3, 2020 by Ricardo Pachon

After a stroke that erased his memory, Giambattista “Yambo” Bodoni, the renowned antiquarian book dealer, resolved to go back to his family house in the Italian Piedmont, the same house where he spent all his childhood. He was looking to recover the remnants of his past now turned into a void, and to assemble them like they were the pieces of an impossible jigsaw. For days he scrabbled through piles of comics books, newspapers, vinyl records, and magazines but to no avail. It was only when he was about to call off his search that he discovered, hidden in the books of his grandfather, an original copy of William Shakespeare’s First Folio, triggering in him such a severe shock that it finally lifted the veil concealing his past. Like a cascade, the memories fell haphazardly and intensely upon him, finally giving the poor antiquarian a sense of who he really was. But tragedy was lurking, as one memory remained forever lost: that of the face of the girl he once loved.

This is the story in Umberto Eco’s The Mysterious Flame of Queen Loana, and though I am a great fan of his work, and the novel is written with his usual mastery, I have to confess that I never felt particularly moved by this book. I always found the image of this character depressing, scavenging from the garbage of the past, giving me the idea that Eco was just ruminating in nostalgia, that cheap and feeble emotion that disgusts me so much. However, I recently became more empathic, less judgmental towards Yambo, as I recognized with some humour that my own actions over the last couple of weeks are suspiciously similar to his.

The global lockdown of 2020 surprised me when I was visiting my family in Bogota. Confined to the house of my childhood, and with no idea of when I will be able to fly back to London, I have spent long hours dusting off the contents of boxes, drawers, and trunks. I have found pictures, cassette tapes, letters, stamped T-shirts, school reports, notebooks, and college books: all the belongings that once defined me are still here, jammed in closets and underneath my bed, where they remained unperturbed for the last fifteen years. Standing out among these objects from forgotten times, I found an extensive collection of books, maps, handwritten notes, and dice that I know were very dear to me. They are the remains that I keep of Dungeons and Dragons, a beautiful game I used to play a long time ago. For the first time in years, I sit down to think about it.

A game made of stories

At its core, Dungeons and Dragons (D&D) is a collaborative storytelling exercise, where a group of players interacts among them to develop a tale. The stories take place in a myriad of imaginary worlds that evoke the legends and chronicles of the European Middle Ages, and which form the bulk of the Matter of Britain, that delightful body of literature from the 12th and 13th century that deals with King Arthur and the Knights of the Round Table.

D&D has been hailed as one of the best games of all-times, and certainly one of the most commercially successful outside the video-game industry. Its inception in the early 1970s was the most disruptive event for tabletop gamers since the launch of Monopoly and Scrabble forty years before. Some 30 million people have played D&D, half of them being active players at the moment. It has inspired countless numbers of role-playing games, video games, books, and movies.

I discovered D&D when I was a teenager, and for a decade I was an avid player, precisely at the time when the broad enthusiasm for the game was fading. I stopped playing it when I moved to Europe, and I remember thinking that it was just a matter of time for the game to be displaced by an explosion of alternative ways of entertainment that just arrived with the incipient social media platforms and computers endowed with more powerful GPUs. I couldn’t be more wrong.

I am only learning this now, but over the last five years, D&D has enjoyed a renewed wave of fervour that matches only the one it had at its peak in the early 1980s. Back in those days, the image of D&D was closely associated with a niche subculture of young white men who played the game across thousands of dorm rooms in American colleges. But these days, that image has shifted to be one that is less monolithic, more inclusive, and perhaps even more glamorous. It seems more common to hear of women joining D&D groups, and of parents who are introducing the game to their pre-adolescent children. Some charismatic players have created catchy YouTube channels where they unravel the cryptic rules that form the foundation of the game, or stream live game sessions with their own groups. And a long list of celebrities, of the likes of Vin Diesel, Joe Manganiello, Stephen Colbert, and Anderson Cooper, have expressed their love for D&D, conferring to the game a panache that it certainly didn’t have back when people thought it was just a hobby of some geeks.

My Dungeons and My Dragons

Although the architects of D&D did not come from the performing arts, their creation brings to memory the type of theatre known as “interactive theatre”, in which the fourth wall that separates performers and audience is removed. The interactive theatre has a long tradition, with examples such as the 1934 theatrical play Night of January 16th, a courtroom drama where the audience takes the role of the jury and decides a verdict that leads to two possible outcomes of the play. And even before, during the 1920s in Soviet Russia, interactive plays like The Glorification of Revolution were used to spread the communist ideology, with the audience taking the role of the Tsar’s soldiers or the workers in arms.

D&D is a game, not a form of artistic expression. However, now that I reflect on my own experience, I recognize that a significant influence in my own way of approaching the game was the Latin-American Cuentería, an artistic movement that would see cuenteros, (i.e., storytellers), standing in front of a crowd telling stories. Typically, each story would not take too long, perhaps 15 minutes each, it would be self-contained, and the audience would not interact. Their range would only be limited by the imagination of the cuentero, who could use drama, comedy, tragedy, terror, fantasy, or folklore as the foundation of the stories. The cuentero is not acting, but needs acting tools to convey a wide range of emotions and images only with his voice and movements.

Back when I was in college, cuentería was huge in Colombian colleges. My friends and I would join dozens more who would congregate around a handful of cuenteros, in one of the campus squares. Hypnotized by the great stories and the bohemian atmosphere surrounding the gathering, it was difficult to resist the temptation of staying and listening to just one more story, at the peril of not making it on time for the Abstract Algebra class. It’s a shame that European universities, more uptight and less prone to indulge their students in such hippy activities, don’t have anything similar to cuentería, certainly something I missed when I studied there.

You can play D&D emphasizing or not the storytelling bit, and you can have great fun either way. However, when it was my turn to serve as the conductor of the game, I would focus almost exclusively on those opportunities for bringing the story to life with a theatrical flair. Going through my notes, I find many annotations indicating gestures and voices that I deemed appropriate during certain parts of the narrative, but for the most part, rehearsing was useless as the storyline was at the mercy of the imagination of all the players. For my games, I would unashamedly steal the lines, characters, and even the entire stories that I had heard from the cuenteros, while at the same time I tried my best to recreate their expressiveness with my negligible scenic talent.

Over the years, I must have played D&D with more than 150 people. With many of them, it was probably just a session or two, encounters too short to be remembered. With some others, however, the stories that we created together spanned for months and years, and though I can barely recall any of the specifics, I know they were epic tales of courage and honour.

Going through the piles of material I still keep of it, I have felt tempted to get back in the game. But when I think about how to make it happen, I hit a wall. For me, playing D&D was my excuse for gathering with some friends and telling them these crazy stories of chivalry and magic. Now, we all are much busier, further apart, with our heads firmly placed in the world as it is. My English is acceptable for conducting business in London and writing the occasional entry in this blog, but I am afraid it lacks the textures and colours that I would need to play a game with non-Spanish speaking players. And if I were to do it regularly with those on this side of the ocean, the problem would be the narrative aspect, which unfortunately does not render well over an online Zoom meeting.

As it always happens in life, chasing happy memories from the past, in a clumsy attempt to revive them, is a recipe for disillusion (or tragedy, if you ask Giambattista Bodoni). It’s always better to start from a tabula rasa, without preconceptions. In the case of D&D, the game of endless possibilities and reincarnations, I am convinced there are other ways of enjoying it. It’s just a matter of looking somewhere else.