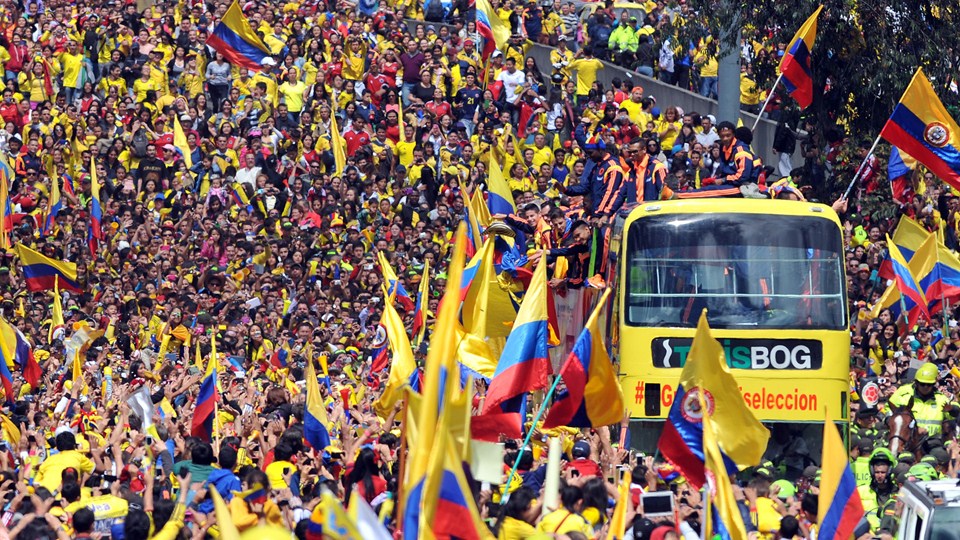 If Colombia Were A Normal Country

The previous is a strange sentence to write. It sounds like if there was something ordinary in killing; that there is an adequate number of murders; that we should aim to have a reasonable amount of homicides. It reminds me of that despicable phrase from former President Julio Cesar Turbay: “We must reduce corruption to its fair proportions.”

No. Just as there are no fair proportions of corruption, there is no number other than zero, of lives taken by the violence that we can tolerate.

But as I said earlier in this blog, the violence of Colombia is so pervasive, that I cannot shake off the envy of seeing other countries, with their troubles and glories, achieving the miracle of not killing themselves with the cruelty with which we do it here. On the first days of every new year, Colombian newspapers publish the consolidated number of homicides for the previous one. Whenever I read that note I always wonder, can we not aspire even to be like the rest of the countries? But we lag so far away from them, that reaching the average countries sounds like a fantasy.

If Colombia were a normal country and had the same homicide rate from the rest of the planet (5 per 100 thousand inhabitants), there would be 5 x 500 = 2,500 homicides per year. The additional 9,500 homicides are abnormal, characteristic of the war we suffer.

That is the undergraduate population of a university in Bogotá, such as Universidad Catolica or the Universidad Jorge Tadeo Lozano.

It is the Plaza de Toros de Santamaría, the emblematic bullring in Bogotá, almost at full capacity.

It is the size of a small town, as many are there in Colombia. Going through the population of its 1,122 municipalities, I realized that many of those beautiful places that I have visited in my travels have populations of 9,500 or less: Barichara, Cachipay, Chipaque, Jenesano, Carmen de Apicalá, Tena.

Every year we raise a new town, of the dimensions of any of these, but one of only dead.

By the end of 2019, we would have sacrificed thousands more; I calculate that another 9 thousand above what would be normal in the rest of the planet. It is a tragedy that happens in slow motion and in real-time, and that we know will happen with the certainty that the sun will rise tomorrow. And that nobody will be able to do anything to stop it.

Violence in Colombia is abnormally high, but that does not mean it is unique. Take, for example, the 50 largest countries in the world, which have populations of more than 20 million inhabitants and that group almost 90% of the world’s population. Among those 50 countries, there are five that stand out for their violence: Mexico, Venezuela, Brazil, South Africa and Colombia (if someone finds a good acronym for these five countries, please let me know).

The homicide rates of Venezuela, South Africa, Brazil, Colombia, and Mexico are significantly higher than those of other large countries, which have rates of 11 or less. (China and India, with rates of 0.6 and 3.2 respectively, do not appear in the graph).

The population of these five countries is only 7% of the total of the planet but concentrates 37% of all homicides. If they could reduce the homicide rate to 10 per 100 thousand inhabitants – a high rate but not ridiculously high as they have now – that of the whole world would fall from 5 to 4. Controlling violence in these five countries is, therefore, an issue that would be felt on a planetary scale.

The evolution of violence in these five countries followed specific circumstances, and in future entries, I hope to share what I learn about them. But it is clear, for example, that violence in Mexico is a recent phenomenon, exacerbated by the war with the cartels which has intensified over the last decade. Although in the 90s, Mexico had homicide rates above 15 per 100 thousand inhabitants, by 2006 it had reduced it to less than 10. The shift was brutal, and three years later, the rate had skyrocketed to more than 20.

In the early 1990s, Venezuela had rates similar to those of Mexico, but its deterioration was gradual and sustained and has failed to stop it ever since. The current homicide rate is more than 50 per 100 thousand inhabitants, but some reports hint that it may be even higher.

The phenomenon of violence in Brazil began a decade earlier. At the beginning of the 80s, the homicide rate was slightly higher than 10 per 100 thousand inhabitants, but by the 90s it had exceeded the threshold of 20, and ever since then, it has remained more or less constant, ranging between 25 and 30 more.

And then, it comes South Africa, the country that I find most intriguing but the one I know the least. For many decades, South Africa has had homicide rates of over 30 per 100 thousand inhabitants. Although it hit the ceiling there in the mid-1990s (with a rate of 80), it has not yet managed to contain its violence to more moderate levels. The situation is so severe that the Police Minister, Bheki Cele, compared the wave of homicides they have with that of a war zone.

Colombia is the only country that can compete with South Africa in terms of the sustainability of excessive violence. One has to go back to the 1940s to find the last time Colombia had a homicide rate of 10 per 100 thousand inhabitants. The analysis of the long-term trends of violent deaths, dating back to 1938, is overwhelming but critical, and it is an issue that deserves its own entry in this blog.

I have not said anything about the more than 140 smaller countries, with populations of less than 20 million, although among them are countries in the Caribbean and sub-Saharan Africa that have very high homicide rates. However, I have the impression (maybe wrong) that their violence may be fundamentally different from that of large countries, and that is why I am not going to focus on them for now. The only exception is the triad of El Salvador, Honduras, and Guatemala, which to be fair make up the sixth region of violence, with 35 million people and an aggregate homicide rate of 46 per 100,000 inhabitants.

Ecuador and Peru are the neighboring countries of Colombia on the southern border. They are far from perfect, afflicted with their own problems of corruption and political instability. They are not rich, and I don’t think there is anything special in their education system. Their violence, however, is just a fraction from ours, with homicide rates that are a quarter. How is that possible? I am absolutely perplexed with this phenomenon, and it is one that I want to understand better.

I don’t know if those who read this post share my desire to rationalize what is happening in Colombia. But for me, it is the only way to disconnect from the rather broad perception that violence in Colombia is a regular issue, an uncomfortable problem that is no greater to the many others we have.

It is not its beaches, nor its mountain ranges, nor its forests. Nor is it its rich biodiversity, nor the impressive catalog of turtles, birds, and frogs that live exclusively there and not anywhere else on the planet. It is not the joy of its people, nor its dances, nor its customs. What makes Colombia extraordinary is its violence.