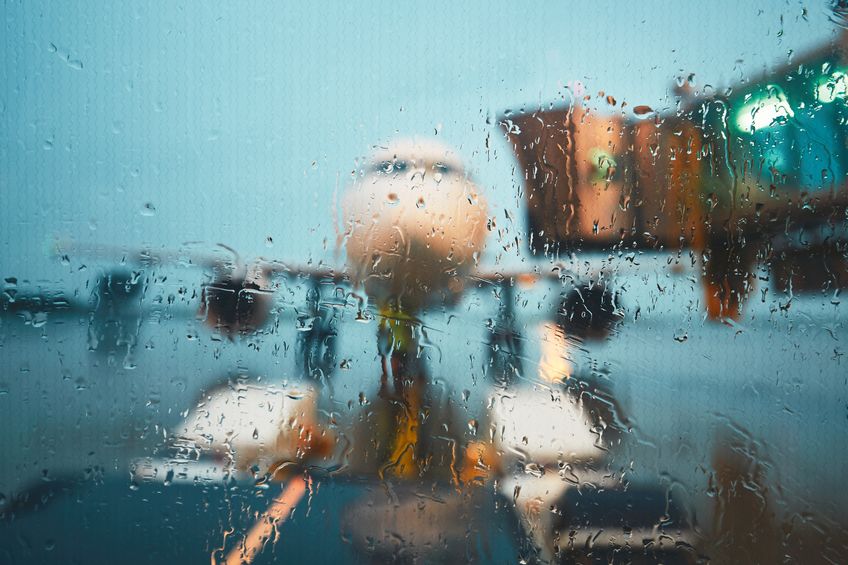 It’s a rainy night in London, and I am drinking a glass of whiskey in a bar at Terminal 2 of Heathrow Airport. I wanted to avoid the rush hour, so I left my flat earlier than needed, but now I find myself with a lot of time to kill in this place. I brought David MacKay’s excellent book “Sustainable Energy Without the Hot Air”, and I am hooked on the technical chapter III.C (Planes II). This is one of those books that you enjoy more with pen and paper. In the 45 minutes that I have been here, I have scribbled four pages of equations and diagrams, following his derivation of the total power required to keep a plane in the air, and his formula of transport efficiency.

But my mind starts to drift away; there is something I have been thinking about lately that bothers me. I make a pause, and then check the departure screen, hanging tall in a corner. In fluorescent green letters, it still reads:

I think for a moment. Yeah, there is still time for another drink. I order a second whiskey, open the text editor and start writing this post.

In an hour or so, I will board a Boeing 787-800 to fly 8500 kilometres over the Atlantic, on my way to Colombia. In its journey of 10 hours, the aircraft will burn 50 tons of aviation fuel, the residue of which, when expelled from the plane, will trigger a chemical reaction that will produce 160 tons of carbon dioxide (CO2). A quarter of that gas will end up in the ocean, and another quarter will be captured by trees, which will combine it with water to form carbohydrates and release oxygen in the photosynthesis process. The rest of the CO2 will remain in the air, suspended there for a long, long time.

The 160 tons of my flight’s CO2 don’t seem like much when you just think about the current numbers in the background. Today, the atmosphere already carries 3200 billion tons of this gas (you read that right: 3.2 trillion tons of CO2), so surely an increase of 0.000005% can’t make too much difference, right?

You get a bit suspicious though when you see how things were in the past: We know that for the last one million years the levels of CO2 have oscillated between 1500 billion and 2300 billion tons, and the last time the planet had the high numbers we have today was probably 20 million years ago. But since the middle of the 19th century, CO2 has skyrocketed, going way above the concentrations it had during the time in which our species evolved (let alone, the concentrations it had during the time in which our civilisation developed). We also know that the source of this increase is the human-made emissions that came on the back of the industrial revolution and technological developments like the plane in which I will fly tonight.

You get very worried when you see where we are heading in the future. Although we have been releasing CO2 in large quantities for the last 150 years, half of that happened only over the previous 30. We are currently emitting 40 billion tons of CO2 per year from all our activities, increasing its concentration in the atmosphere, and moving further away from the historical averages (and by “historical”, I mean millions of years). The problem – the immense, enormous, catastrophic problem – is that CO2 has the property of letting the Sun’s heat to come in, but prevents it to be radiated away from the Earth’s surface, keeping it trapped below the atmosphere. This is a property crucial for life on Earth, as it has kept our planet warm and cosy for plants and animals to survive, but if there is too much CO2, the globe can get dangerously hot. Scientists have estimated that we really, really, should not go beyond 3500 billion tons of CO2 in the atmosphere, as breaching that ceiling will push the weather into a frantic mode that will threaten human societies and life ecosystems all over the world.

To recap: In the last 150 years we – the humans of the industrial age – have managed to raise the CO2 levels from 2300 billion tons to 3200 billion tons, half of that increase produced during the same time that The Simpsons have been on the air. We really should not go over 3500 billion, as that will trigger disastrous changes in the weather. So, we only have some 300 billion tons left, but we are releasing 40 billion tons per year.

I, and the other 249 people that bought a ticket for tonight’s flight, inadvertently chipped in to buy and burn 50 tons of fuel, producing as a by-product 160 tons of a contaminant for which there is now only a very narrow margin of capacity. Unlike any other type of litter, we were not penalised nor forced to do anything about it.

I check the departure screen once more:

“Could I have the bill, please?”

I look through the tiny window of the plane, covered with the drops of rain that form prisms distorting the lights coming from the airport. A long queue of passengers trying to get to their seats inside the plane is blocked now by a short, bald man, currently undergoing a heroic struggle against the laws of physics, trying to fit a large, cherry-colour suitcase in the overhead compartment. People look a bit baffled but nobody complains, nor helps, nor tries to deter him from the impossible quest. We are all thinking: “Why bother? He will find out eventually”. A young Venezuelan couple manages to squeeze in and get to my row. They check the seat numbers and start putting their bags and coats wherever there is some space left. When they are done and sit next to me, I greet them, and they reply with a big smile; they get back to their animated conversation, and I get back to my laptop.

The aviation industry is in the eye of the storm that environmentalists are bringing to big polluters. Overall, aviation contributes with almost 900 million tons of CO2 every year, but their impact on global warming is probably double due to other chemicals that planes release while in the air (what is known as radiative forcing). Although there are more than 4 billion passengers carried by the world’s airlines, the number of people flying must be a fraction, as you add up one more to the passengers total every time you take a plane (last year, me alone counted as 26 passengers). Moreover, 80% of emissions come from flights over 1,500 kilometres, like mine between London and Bogota, which probably narrows the proportion of the population having this type of impact even further. A concrete example might be more enlightening: The annual CO2 per capita in Colombia is 1.6 tons, which means that this plane’s emissions over the next 10 hours will be the same as that of 100 Colombians over a full year.

The “flygskam” movement, originated in Sweden last year, advocates to put some social pressure on people to nudge them into quitting flying. The word itself translates as “flight shame” and the goal of the movement is to create an environment in which flying is frown upon, leading people to feel ashamed of using planes. The idea behind all this is that if there is enough shame in the thousands of people flying, say, between London and Bogotá perhaps at some point they will decide not to do it anymore. Avianca, the airline, would eventually feel the demand void through the pricing mechanisms, making management realise that an everyday flight as the one I’m taking tonight is not profitable, forcing them to decrease the supply. Perhaps with some luck and a lot of shaming, flygskam could make a direct flight between London and Bogota an oddity.

The movement places a lot of emphasis in short trips that could be done instead by train, at the expense of taking more time, but rewarded with “tagskryt”, literally “train-bragging”, the social endorsement on the other side of the coin of flygskam. Holidays that cannot be done with vehicles other than planes are heavily criticised as lavish and unnecessary, and business travels are mostly regarded just as another form of corporate swagger. Here are a few ideas on how to deal with your new sense of shame, proposed by an American activist:

“[S]tart conducting more remote work meetings and training sessions virtually. Inform those jet-setting friends that you won’t attend their destination wedding in the tropics — you’ll send a gift in the mail. Tell that conference organiser that while you’re honoured to be invited, you would prefer to participate in live online sessions instead. Start taking vacations by train or car, rather than flying to Paris or beyond.”

How the actual shaming happens is not well structured, but I guess that anything goes, ranging from passive-aggressive comments to your colleague flying to Thailand for holidays, to online bullying to travel bloggers and influencers.

I certainly have seen an invigorated fervour in people making the case that some of us are living unethical lives and that our actions should evolve to mirror theirs. Our lifestyles are optional and therefore, mutable. The more stubborn we get about fully transforming ourselves into them, the more shame will need to be inflicted on us.

A brunette flight attendant asks me to remove my headphones:

“Sir, could you please stow your tray table and turn off the laptop. We are about to take off.”

Continues here: I am not proud of flying (but I am not ashamed of it either) – Part 2