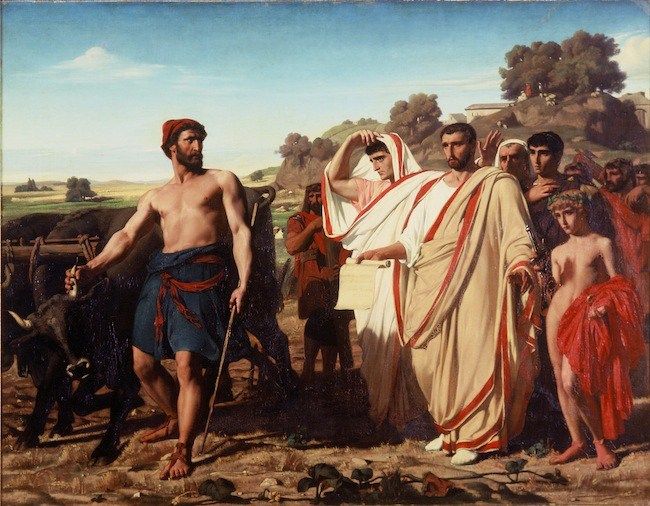 The confrontation between Rome and the Ecuos had reached a critical point when the consul Lucio Menucio was besieged in the camp he had built near Tusculum. In Rome, the senate panicked and decided that the only salvation was to call General Lucio Quincio Cincinato to make him dictator. It was a risky gamble, since the dictator’s powers were unlimited, and there was a risk of opening the doors to someone with such an ambition for power that later it was impossible to control.

Legend has it that when the senate delegation arrived at the Cincinnati to inform him of his appointment, he found him plowing the lands of his small plot that he had in front of the humble hut where he lived with his wife. As soon as he received the dictator’s robe, he left for Rome where he summoned an army with which he attacked and defeated the ecuos. Sixteen days later, and with his work accomplished, Cincinato resigned as dictator and returned to his plot to continue plowing the land.

The history of Cincinato fascinated the Romans of the republic, who saw in their actions the model of the perfect, capable and brave leader, but above all detached from the desire for power. Fears of what would happen when a person accumulated too much power would only materialize four hundred years later when Julius Caesar proclaimed himself dictator for life and Rome entered the era of the emperors.

Yesterday I wrote about incentives, those external influences that shape our behavior, and reflected on which, in my opinion, is the one that most affects politicians. He also pointed out that motivation was somewhat different from incentive because it comes from within the individual and marks his long-term aspirations. Then the question continues: What are the motivations that move politicians?

I think it would be too cynical to doubt the vocation of service that politicians have in general, and I can accept without problem that any (or well, let’s say the majority) of those who aspire to occupy a position of popular election has the firm conviction of wanting to help to your community. However, I think the observation that politicians have a natural ambition for power is also valid. I do not know if it will be a psychological need that they have to control others, to tell others how they have to live, the truth is that one recognizes a pattern that is repeated in all the cardinal points, in all times of life. history. First of all, the politician is convinced that it is essential, that history has called him to save his people.

Sure, when our candidates are asked what their motivations were to get into the political tale we always hear the sweetened stories of a supreme call to serve others, but we will never listen to one who, looking at the camera, Say “well look, what drives me is a great desire for power.” But then the problems and the scandals begin, and here I am and here I stay, and we are going to change an article to save the country, and we are going to release an ex-president only for humanitarian reasons. And in all those cases, and in an infinity more, what we see to the politician that we choose, tied to the desk, giving blows and kicks to whoever approaches him to tell him that the time has come to leave.

We have been two thousand five hundred years dreaming that Cincinnato is going to return, that the great general is going to accept with humility the charge that we make him to come to save our republic. But above all, we dream that when everything is in order, and without us having to ask him, he will renounce the immense power that we have conferred on him and will return to his plot to continue plowing the land.

Elections, so fragile, so manipulable, so damaged, have shown that they have a very reduced capacity to stop the attacks of power-hungry politicians. There will be those who do not see a problem in this and believe that a strong leader anchored in power is the ideal recipe to fix a country, but there we have already completely deviated from the issue of democracy and entered a very dark subject. At the moment I leave it there, but if anyone wants, I will be happy to get into that debate, not controversial at all, which is that of dictatorships in our time.

Can we design a democratic system in which the rulers we choose cannot perpetuate themselves in power?