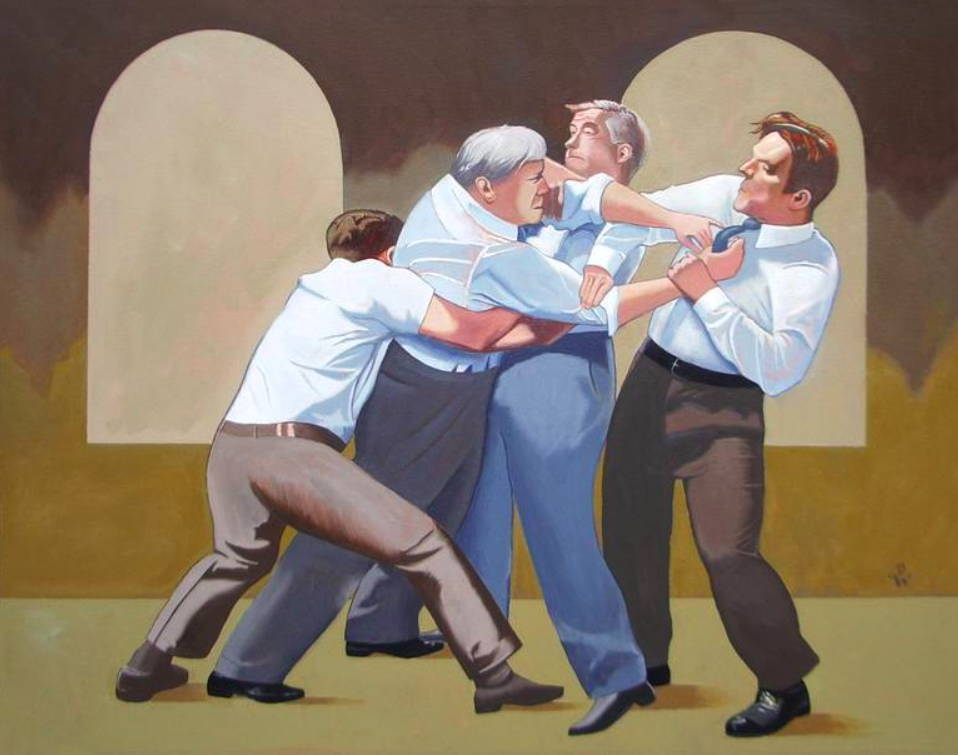 The thesis runs that the pile of murdered that rises in Colombia every year is due to our violent nature, to our flammable spirit that we explode perhaps too many times at the point of brandy, chicha and guarapo. He found his wife unfaithful to him and killed her and her lover. That other one was closed by a taxi driver, which made his blood boil so much that as soon as he could reach and confront him, I did not hesitate to crush the offender’s head with a crosshead that he had on hand. Those two were friends, but drunk they began to fight over whether America was better than National, and in a moment of madness one struck a deadly stab into the other’s heart.

We are culturally violent, says that thesis. We do not respect life, we do not measure our actions, we do not seek to resolve our conflicts through dialogue. Violence in Colombia arises spontaneously, when our primitive and runaway impulses imprint movement on our hands, wielding machetes and pistols.

The same thesis presupposes that violence in Colombia is a historical constant, the fruit of some original sin, and that is why we should look in our history books for the precise moment in which fratricidal violence spread everywhere. Maybe it was when Juan Roa Sierra shot Jorge Eliecer Gaitán. Or when Rafael Uribe Uribe tried to take Bucaramanga. Or when the Morales brothers asked José Gonzales Llorente for the vase. Maybe even the problem comes from before, after all, what can you expect from the children of the Caribbean warrior and the Spanish privateer?

There are many who subscribe to the thesis of the culture of violence in Colombia, but without a doubt its champion must be former defense minister Luis Carlos Villegas (the same one who underestimated the homicides that would have occurred in 2018 by 30%) , who claimed that most of the murders of social leaders in the regions were due to “skirt trouble.” But of course! Those guess who knows what they were doing, geez.

If it is our culture that explains why the murder rate in Colombia is five times higher than that of the planet’s average, the problem at heart is one of coexistence. So let us reform our education to learn to dialogue. Let’s establish more controls around the drink, because clearly we are the worst drunks on the planet. Let’s impose self-control courses. Let us disarm our hearts. Let’s go more to mass. Let’s do more yoga.

tolerant but not murderous

All of the above is a myth: The more than 12,000 murders that Colombia has a year are not the manifestation of a culture of violence. It is tempting to take the general intolerance that we perceive in others – the one that stuns us on a daily basis – and extrapolate it to offer a holistic explanation of homicidal crime. But this line of argument lacks solid evidence, and falls short in answering many questions about violence in Colombia.

The first thing we should do is see what the numbers tell us. Of the 12,130 killings reported by Forensic Medicine last year, how many can be attributed to our culture of violence? The answer is terrible: We don’t know.

Buried in the Forensis report of 2018, which prepares Legal Medicine every year on violence, the following pearl appears on homicides in Colombia: “More than 70% in the case of men and more than 60% in that of women do not count with information regarding the circumstance of the fact. ”

Of the cases for which we do have information, we know that 1,400 people died from intrapersonal violence, 270 from intra-family violence, and 80 women were victims of femicide. Discriminating for “activity during the event”, the report indicates that in a thousand cases, the homicide took place during “activities related to attending cultural, entertainment and / or sporting events” (which is a very elegant way of saying ” Rumba lasts in seedy clubs and / or going to look for a fight in the brave bars of the stadium “).

Legal Medicine many times summarizes its report to the media (who don’t take the trouble to read it) saying that in 42% of cases the deaths are due to interpersonal violence, making people think that impulsive fights are the ones that explain good part of the homicides in Colombia. But of course, it is that it is 42% of the cases in which we have information, which is only a small part of the totality. This is a misleading way to present the numbers, and Legal Medicine would do the country a favor by being clear about the tremendous gap we have in the information.

It is not credible to think that the circumstances behind the 70% of homicides for which we do not have information preserve the same proportion of 30% of the cases for which we do have it. Very surely, impulsive and unintentional homicides are those in which the victimizer makes visible errors, which allow investigators to clarify more easily what happened. But the murders that remain in limbo must have a minimum degree of refinement in order to remain in impunity, a refinement that rarely goes to the one who loses his head for an instant, and kills his compadre for his violent culture.

Two arguments against the myth of violent culture

It is worrying that this myth about the structure of our violence is so ingrained, not only among citizens but also among the government. If a defense minister is capable of saying such an outrage like that said by Mr. Villegas without blushing, what can we expect from his proposals to effectively combat homicide?

Fortunately, academic researchers have not failed into that trap, and for at least two decades they have produced work that questions the simplistic narrative. There are two arguments that I have found in academic works that are particularly relevant to refute the myth of violent culture as the engine of homicides: its variability over time, and its spatial targeting.

If what happens to us is that we have faulty genes that make us violent, or we have an unusual appetite for murder, how do you explain the dramatic increases and falls in the murder rate in the last 80 years? Even within the same decade, variations of multiple multiples can be found, and that contradicts the possibility that violence has been a historical constant. Is it that there are years in which we are more irascible and others in which we are more peaceful?

When we talk about culture we are talking about behaviors that are sustained over time, and that are not easy to modify. The only way to dramatically change the intimate fiber of a society from one year to the next is if it is subjected to brutal shocks in which its very survival is at stake. But although everything has happened to us in Colombia, the zombie apocalypse has not yet reached us, making us all instantly potential murderers.

A series of research works have focused on decomposing the country’s indicators of violence in terms of socioeconomic variables, such as poverty rates, inequality, education, and the effectiveness of justice. What these studies show is that if there are external conditions they correlate with violence, and that they even have a causal effect. The conclusions of these empirical works are sometimes anti-intuitive because they do not support the popular beliefs that we have, that such a thing matters more than another in explaining violence. However, it is precisely these observations based on objective analysis that must form the basis of our public policies to face the challenge facing Colombia. In a future post I will be focusing on these works.

The variability of homicide over time contrasts with its geographical distribution. Time and again it has been established that murders are concentrated in certain departments and not in others. And in the departments with more violence, there are cities in which there are cities and municipalities with more homicides than in others. And in the same cities, there are neighborhoods that exhibit extremely high rates of violence, while there are others as peaceful as any Nordic city would have.

What this shows is that violence is not impulsive and diffuse, with homogeneous levels throughout the regions, but that it is focused and instrumental. Thus, we cannot speak of us, violent Colombians who are an insult away from adding another dead person to the list of Legal Medicine, but we must speak of them, the murderers who live among us.

And then who are the killers?

The Medellín cartel, the Cali cartel, the Norte del Valle cartel, the Costa cartel, the United Self-Defense Forces of Colombia, the Quintín Lame, the M-19, the FARC, the ELN, the EPL have marched through Colombia. , the ERP, the MADO, the SEA, the Armed Commands of the Revolutionary Independent Movement, the Guevarista Revolutionary Army, the Pelusas, the Paisas, the Clan Úsuga, the Gulf Clan, the Rastrojos, the ERPAC, the Meta Block, the Bloque Liberators of Vichada, Puntilleros, Envigado Office, Aguilas Negras, and Urabeños, among others.

I look at this list and wonder, isn’t there something a little obvious about who may be behind the high homicide numbers?

In a country in which criminal gangs have already used all possible acronyms to name their armies, in which it seems that each department has its own cartel and each middle paramilitary command opened its own branch, do we believe that it is our spirit of warfare and our intransigence the one that causes the annual flood of homicides? Is it hard for us to imagine who are causing the thousands of deaths? Do we need a great theory of everything based on our culture to explain the violence in Colombia?

This is the sixth entry in my series on Violence in Colombia: