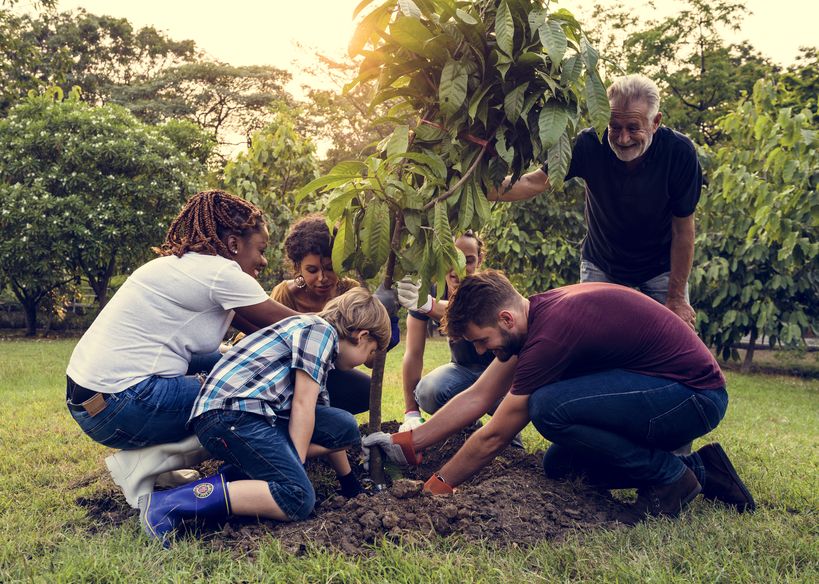 This year I have been reading a few good books on climate change. I enjoy the more technical ones, particularly those written a few years ago, rather than the new, wishy-washy ones that are cropping up bookstores these days. The minimum knowledge needed to grasp the surface of climate change is quite extensive, and I know I need all those numbers, figures and tables to make sense of the problem.

Something I have noticed though is that none of these books starts with a discussion of the graph that I think encapsulates more information relevant for the current crisis. The figure is the following:

That curve is just mind-blowing! Although you always hear a lot about “overpopulation”, I feel the magnitude of the phenomenon cannot be captured only with words. Looking at that steep hockey stick, you start believing that weird piece of trivia that says that 15% of humans that have ever existed on this planet are alive now. It is also fun to realize how very few of us there were in the past. During the times of the mighty Emperor Augustus, for example, the world population was half of the current population of the US. Later, during the times of Shakespeare and Cervantes, just slightly smaller than Latin America nowadays. And only at the dawn of the industrial revolution, we reached what is now the population of India.

But to get a better view of how we got up here, to a population of 7.7 billion people, it is useful to dissect the rate at which it grew over history.

For thousands of years, the human population grew, on average, at a sluggish rate of 0.05% per year. It is hard to have some intuition of what that number means, so imagine I’m talking about speeds, and replace that 0.05% with something like 5 km per hour – the speed at which you usually walk.

Things picked up a bit at the turn of the 1700s, with the advancements of the Enlightenment, and with a steady pace, we increased that growth rate until it reached 0.60% by the mid 20th century – a tenfold increase over 250 years. Continuing with the analogy, after all those years we were cruising at 60 km per hour, the speed at which you usually drive.

But then, at the end of World War II, humans went through a super-acceleration period, and over two decades we pushed the growth rate more and more, until it peaked in 1968, when our annual growth rate reached 2.1%. Imagine now that our speed is 210 km per hour, the average of a Formula 1 car during the course of a race.

Since 1968 we have kept our foot on the breaks, and for 50 consecutive years, we have been decelerating. As of 2019, our growth rate is 1.1%, or in my speed terms, 110 km per hour – still fast, like driving in the highway, but nowhere near what we experienced in the 1960s. The Department of Economic and Social Affairs of United Nations forecasts that we will slow more, reverting back, by the end of this century, to the walking speed we had before the 1700s. If you see the graph below, you get the feeling that humans will never grow again at the frantic rates of those two decades, marking 1968 forever as a notorious bleep in the data. 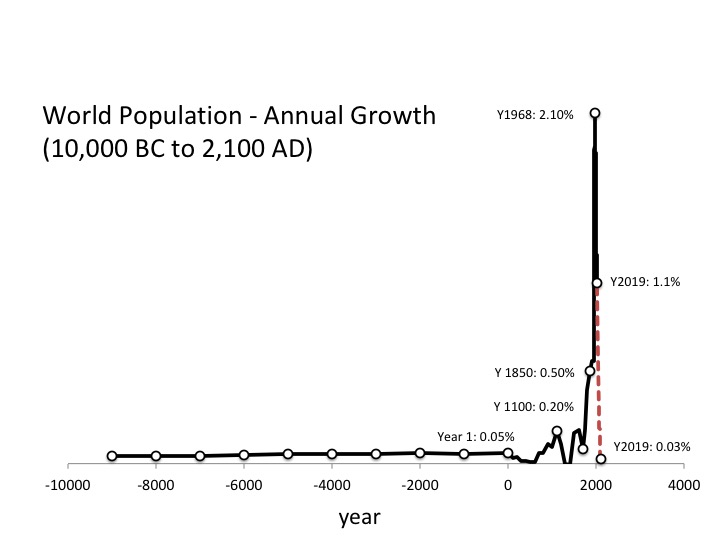 Ever since the start of the industrial revolution, we humans have been polluting the atmosphere by emitting CO2 and other greenhouse effect gases. And we know that the higher their concentration in the atmosphere, the hotter it gets here on the surface of the planet. So, it is correct to say that the problem of global warming started in the early 19th century. In 1958, when Dave Keeling began measuring CO2 concentrations in the atmosphere from the Mauna Loa Observatory in Hawaii, the problem had been underway for more than a century. His measurement for that year, of 315 parts-per-million, was already significantly higher than the levels at pre-industrial times (researchers would later establish it was 280 parts-per-million).

What turned global warming from a problem into a full crisis was the super-acceleration of the 1950s and 60s. Judging from the CO2 emissions per capita in developed countries, which have remained constant – or even decreased – over the last hundred years, one gets the feeling that the levels of greed and consumerism in individuals have not changed that much over time. Those behavioral patterns did not matter much when aggregated across hundreds of millions of people, but now that the count is in the billions, things are drastically different.

I am going out on a limb here, but assuming that the global population had kept growing at pre-1945 rates, I calculate that the dangerously high levels of CO2 concentration in the atmosphere that we have now would have been postponed to the 22nd century.

Global warming is an existential problem, since extracting fossil fuels from the earth, then releasing carbon in the atmosphere is a strategy that would end up causing havoc sooner or later, even if we were growing at a slower pace. And global warming, as a problem, needs to be resolved by humanity at some point, either in this century or in the next. But as a crisis, global warming is an event that unfolded exceptionally quickly, making the timing a fundamental piece in the puzzle. The challenge is so daunting because we only have one generation – maybe two – to agree and execute on an action plan that can divert us from the cliff.

During the photosynthetic process, plants absorb CO2, which they combine with oxygen to produce carbohydrates, and so, you can think of them as counterparts of humans in some regard: we are the sources while they are the sinks.

The human super-acceleration of the mid-20th century increased the pressure we exert directly on ecosystems, as we needed to extract more resources from nature. However, an indirect impact from the population growth is that we may have also dislocated the humans-tree ratio that kept the greenhouse effects in check for thousands of years. Plants already capture a quarter of CO2 emissions in the atmosphere, but one may wonder if there is a way of bringing that proportion even higher. Or, in other words, if the human population grew at abnormal rates, creating the crisis we are facing now, shouldn’t we engineer a solution for the population of plants to grow at abnormal rates as well?

One way or another, this is the consideration behind many projects around the world, which promote forest conservation and afforestation on a global scale. For example, the Bonn Challenge seeks to restore 350 million hectares of the world’s deforested and degraded land by 2030. And for the same year, the New York Declaration on Forests commits some governments, companies, and civil society organizations to end deforestation.

But the magnitude of the task is colossal. The current forested area in the world is 5.5 billion hectares, roughly the total area of Eurasia, hosting around 3 trillion trees. The Intergovernmental Panel on Climate Change estimates that to limit global warming to 1.5 degrees Celsius by 2050, we would need to add 1 billion hectares of new forests, i.e., an area a big as Europe. Is that even physically possible?

Intuition would lead you to believe that there is no room on the planet for growing 700 billion native tree saplings that could grow naturally. But, as it is often the case, intuition is not the right guide for thinking about planetary issues. Earlier this year, a group of researchers at ETH in Zurich found that such vast amount of land is indeed available for reforestation purposes, with half of the potential concentrated in six countries (in millions of hectares: Russia, 151; the United States, 103; Canada, 78; Australia, 58; Brazil, 50; and China, 40).

Compared to new technologies for carbon capture, planting trees seem to be a cheaper alternative, with some estimates suggesting that the reforestation of 1 billion hectares of forest would cost somewhere between $200 billion and $300 billion. That number is suspiciously low (basically the cost of two International Space Stations) because it is based on the most effective reforesting projects out there, and the actual number might be several times that figure. Nevertheless, the enterprise seems somehow viable and acknowledges that the current crisis, to some degree, is attributable to the unbalance between humans and other living species.

It is becoming customary that some factions of the green movement receive with skepticism and rage any new insight to tackle the climate crisis when it does not fit exactly their narrative of what needs to be done to avert the catastrophe. The idea of planting more trees is no exception and, paradoxically, it has become the topic of fierce debate among those who see this initiative as a fundamental piece in the fight against global warming, and those who think it is a risky and even dangerous endeavor. I find myself firmly in the former group, and now that I am becoming more interested in offsetting my own emissions, I am looking specifically into those projects that advocate for the restoration of existing forests, or the afforestation of new ones.

But perhaps I am biased. Those who know me probably know that I love forests, so for me, it is thrilling to realize that part of the solution to the climate crisis resides precisely there. I regret that I cannot spend more time in the outdoors, and frankly, I don’t know when I will be able to do it more regularly. However, until that glorious day comes, I kind of like the idea of helping, even if it is in a small way, for more places on earth to be covered with more trees – surely our best friends, and most trusted allies against global warming.

You may want to read my previous two entries about Climate Change: