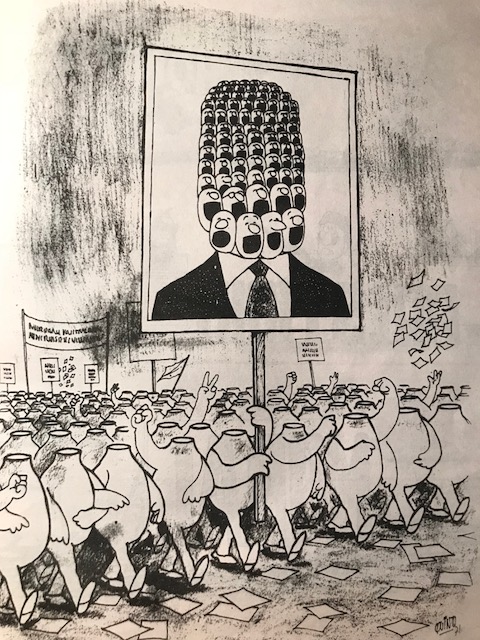 The road I travelled to become a fanatic of elections began, not when I was 19 years old and voted for the first time but fifteen years before when my parents took me to the polling place with them for the presidential elections in which Belisario would win. The atmosphere was unusually festive, with the streets filled with people and flags, and cars honking with enthusiasm, papered with posters of the candidates. In a corner, while my parents spoke with some acquaintances, my sister and I joined other children to sing at the top of our lungs that tune we have heard the whole day: “Galán al poder, López a barrer…!“.

Since that day elections became part of my DNA, being for years an observer of the very practice of the ritual. And when it was my turn to exercise the right, I did not let it go. Prior to each election, I would spend days reading carefully the proposals of the various candidates and discussing passionately with friends and family the strengths of one, and the weaknesses of the other. I took the precaution that there was no conflict on my calendar on the day of the elections and I made sure that my ID was always registered, even when living abroad. And of course, as if I was Savonarola himself, I would preach to the unbelievers: “It does not matter whom you vote for, the important thing is to vote!”. “Vote, even if it’s just a blank vote!” “If only more people voted, we would have a better Colombia.” “If you don’t vote, then don’t complain!”

Of course, that behaviour tends to be the norm all over the world, from Mexico to Korea, from Finland to South Africa: Elections, we are told, are the origin of all our liberties, the fundamental pillar of our civilization, the double elixir against despotism and anarchy.

But elections are none of that. In essence, elections are a social technology: a series of procedures, rules, and calculations that we use to help us make certain decisions. Elections are that alchemy with which we magically transmute the preferences of individuals into something we call “the voice of the people.” They seem so simple, so transparent, and so pure that to question them is crazy. But when we remove the mysticism from the elections and see them for what they are, we feel free to ask uncomfortable questions: Can elections organize society in the way we want? Do they have any harmful effects? Are there alternatives to elections? Like any other piece of technology that humans have created, elections can be dissected and carefully studied, and are prone to be improved or replaced.

However, this very mundane vision of elections clashes head-on with the cult-like status to which we have elevated them for more than 200 years. Like many cults where there is more passion than reason, elections are built on a series of myths, the most harmful in my opinion, the one that says that democracy and elections are the same things and that the two words are just synonyms. What follows is that for many people, to speak of democracy without elections is an oxymoron, or on the flip side, no matter how totalitarian a state is, we can’t question its democratic spirit as long as it holds elections.

Elections are a piece of technology, just as it is the internal combustion engine used by cars. But in the same way, as we have been aware for decades of the environmental damage we cause by burning oil, we also have to be aware of how toxic elections could be and how inadequate they are to reach the chimera that is the democratic society. The list of problems that elections create is very long: corruption, the perpetuation of political castes, disconnection of the people and their rulers, vulnerability to misleading advertising, cognitive dissonance of the voters, lack of legitimacy, representation bias. The problems extend even to the seemingly trivial mathematics of counting votes and adding them up. On all these points I will have to go back.

For me, it is time to act. That is why, in order to shake off the faith in the elections I have professed all my life, this year I have abstained from voting. My friends, almost without exception, have been shocked when I told them my resolution, but that is precisely the whole point of it: Not voting is an exercise in disobedience, a tiny act of protest against a system that is suffocating us. By not voting, I go against what society expects from me, and therefore I must make the effort to explain in detail why I do it. And above all, it pushes me to face and solve that other myth that says that there is not, and there will never be, an alternative to that sacrosanct, pure, and good system that elections are.

The title of this entry is the same as the one of the excellent book “Tegen Verkiezingen” by David Van Reybrouck, from which I borrowed some ideas.