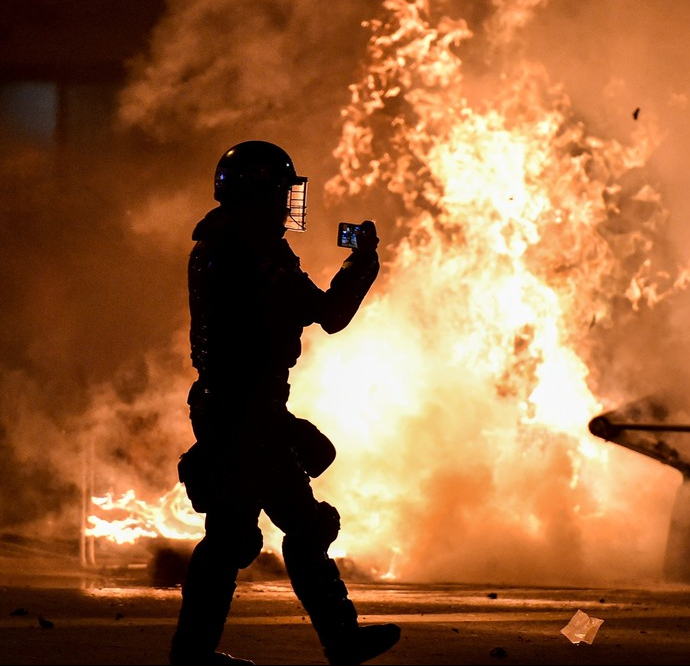 A Letter to Laura

Among the many gigabytes of information that appeared on my screens this week about the protests in Colombia, it was your text that made me think the most.

I can almost see the scene you briefly mention: You announce at home that you will attend one of the protests happening all over the city; your parents get in shock, thinking that something terrible could happen to you. You assure them that nothing will happen because it is in Cedritos, and in Cedritos, nothing ever happens; they reply that in a heartbeat, everything can blow up violently, especially when the police are out of control in their repression of the protesters. You argue vehemently about the importance of protesting about what is happening in Colombia; they agree with you, they even support the protests, but they tell you that you are going to cause them a heart attack if you cross that door and fall into the middle of God knows what rampage. You finally accept that you are not going because you do not want to scare them, but when you do so, something inside you breaks; they breathe a sigh of relief that they have avoided having to play dice with the gods of misfortune – at least for another day.

Since you are family, the episode touches me, and I feel great empathy with both you and your parents. However, beyond those feelings, and as I said before, it was your following reflection that threw me into a chain of thoughts, because at the heart of what you write, you pose a fundamental question without making it explicit: What should I do? If getting a university degree, dedicating yourself to teaching, having a community conscience, and trying to make yourself heard does not seem to move the convulsed reality one iota, what should you do?

There will be few who can still remain undaunted by the implosion that Colombia suffers in slow motion. Of course, what this implosion is all about has its own interpretation by each person according to their own mental model of the country, and the only thing we all agree on is that those who are on the other side are precisely the cause of the calamity. But regardless of this, we are all faced with the question of how to act in the face of events that are far beyond our control and understanding. Therefore, that question is universal, as it is also the frustration that goes with it, for the helplessness of not even scratching the crust of this reality.

In 1967, Noam Chomsky published a famous essay entitled “The Responsibility of Intellectuals”, as a reflection on the role that these played in the face of great social events. Those were the days of the Vietnam War, and Chomsky had already positioned himself as a staunch critic of the United States’ actions in Southeast Asia. He concludes that the intellectual had at least three specific responsibilities: (1) Telling the truth and denouncing lies; (2) provide the discussion with a historical context; and (3) lift the veil of ideology, that straitjacket that restricts debate.

How well Chomsky’s essay has aged is not very clear to me, particularly because these days the appellative of “intellectual” must be unappealing even to intellectuals themselves. It is easy to imagine a caste of white men in American and European universities fifty years ago, on whom society had placed the hard labour of thinking about humanity’s problems. Chomsky was a representative specimen of this group, being a professor at M.I.T. and from whose pulpit he could amplify a message that the public could not easily ignore.

Today things are very different. First, because many more people have taken university studies, recalibrating the relationship between the masses and those whose only job is to think – “after all, I also spent years doing something similar “a few must think. And second, because the communication channels that we have today do not privilege in the least those sitting in the universities, but rather those who have higher audiences on YouTube and Instagram.

All this to say that the responsibility that Chomsky writes about, and that he lays only on a “privileged minority”, must be diffused more widely today. Ours is a society in which – for better or for worse – we all think of ourselves as intellectuals, we all have many opinions, and we all have access to big megaphones. Of course, I would love if the size of the megaphone was not necessarily proportional to how attractive you can sculpt your presence in social networks, but hey, it is what it is.

Among Chomsky’s recommendations, are there any that resonate with you? You, as a historian and school teacher, can perhaps modify the original intention of his observations and apply them to your context. Chomsky spoke to the intellectuals who surrendered to power and who worked for the White House or the RAND Corporation, but perhaps it is possible to reimagine how and to whom you have to tell the truth, to whom you have to provide historical context, and to whom you have to help lift the veil of ideology.

These ideas of how to act are helpful to me – but only up to a point. Let me explain. I am not a reductionist, but I think it is advantageous to build a system to sharpen my understanding. According to Borges, “a system is nothing more than the subordination of all aspects of the universe to any one of its aspects”, and in the case of Colombia, that aspect is, for me, its violence. Its infinite, everlasting, chameleonic, barbaric, unbalanced, terrifying, horrendous, medieval, overflowing, inexplicable, unstoppable violence, if you allow me to add some adjectives to it. It’s fucking violence, if you allow me to be more precise.

And what we have seen in the last two weeks is a carnival of violence with a multitude of representations, and that covers a whole spectrum: the broken glass, the looted warehouses, the burned buses, the fights with stones, the destructions of CAIs, the stabbing of ESMAD men, the enraged mob lynching a policeman, the hundred law enforcement officers that were wounded, the one who got murdered.

But in an entirely different category is police brutality – the correct technical term used to describe all abuse by law enforcement agencies. Of course, police brutality was not born in Colombia, and we might not even be the country where most of these crimes are committed. But its increase in recent years, and that it becomes more intense precisely whenever there are social protests, heralds a nightmare in which many of us do not want to enter.

It does not matter if you are in the advanced Nordic countries or in the very poor of Sub-Saharan Africa, you will always find police brutality – it is a phenomenon that arises almost naturally when creating an institution with its powers. So why would someone think that Colombia is exempt from that particular type of violence? And even more so when we have a long history of horrors committed by the security forces? To give just one example: On June 9, 1954, a massive student march through downtown Bogotá ran into an army battalion that opened fire on the protesters. There were thirteen deaths, something that was unthinkable that could happen at the time, but that indeed happened. My uncle Pepe – your grandfather Álvaro’s brother – was in one of the first rows of the march and could easily have been one of the fatalities of that day. My cousin’s fears that you would go on a protest last week were therefore not unreasonable.

If we cannot stop police brutality now that we have accumulated 50+ homicides during the protests of the last year and a half, it is not ridiculous to think that after a few years, we’ll reach the level of brutality displayed during the Tahir Square protests in Cairo in 2011 (800+ homicides) or Iraq in 2019 (600+ homicides). Is that where we want to go?

Limited by my abilities, the best reading that I have been able to give to the reality in Colombia is framed in its violence. Armed with this system, I return to Chomsky’s arguments and conclude that perhaps I am on the right track regarding what I should do. I have read and written about it, and it is constantly in my thoughts. Maybe if I keep doing it for several more decades, I will be able to tell that truth more effectively to those who hold some kind of power. Who knows.

But I am left with some emptiness. Isn’t there something else I need to do? The lack of more concrete action in these recommendations to the intellectuals seems insufficient to me. My presence at a protest is insignificant, but it may seem gigantic compared to the two thousand words I can write on the subject of violence on a remote corner of the internet. On this issue of the relationship between our virtual activism and the genuine changes that are being achieved in society, I have found the book “Twitter and Tear Gas” particularly relevant. Zeynep Tufekci’s point in this book is that around movements that seek social change, there are two elements that intermingle but are essentially different: The “capacity” and the “signal”. The capacity contains the narrative of the problem and the specific legislative changes that are sought. The protests on the street and the online activism in social networks are the signs of such capacity. You might already hint where this is going: Signals are only noise if they do not come from a well-structured capacity. Or, putting it in other words, if there is not a serious and hierarchical organization that promotes the construction of that capacity, what you end up having are those strange exercises such as Occupy Wall Street that were forever lost in irrelevance.

I do not think that it is enough to simply reflect on the country’s problems and achieve a balanced vision of the problem. It also doesn’t seem like it’s enough to structure your thoughts and discuss them with a few friends and acquaintances. It is not even enough to go out on the streets and protest, as you wanted to do this week or as Pepe did in ’54. It is essential to organize, or more precisely, to actively engage in organizations that can articulate that capacity that Tufkci speaks of and that reflects your set of values ​​and beliefs – your system.

Several organizations focus on the issue of violence in Colombia. Amnesty International is one that I find particularly compelling, and I have been making monthly donations to them for several years. However, how to get more involved is something that I have not yet figured out. If you have ideas on how to do it, please let me know. Perhaps by talking among cousins, uncles, nephews and friends, we can find a more satisfactory answer to the question of what we should do.

I am with you in your feeling of desolation and sadness. Things are not good, and you know I’m lying when I tell you that they will get better soon. Our individual actions are inconsequential, and it seems that they do not affect the reality in which we are immersed. There is noise everywhere, and I have a strong feeling that no one can hear what I’m saying. It is to this very grey scenery that Gramsci’s aphorism infuses light and colour: “You must be a pessimist of intellect, but an optimist of will.”

I send you and your family all my love.