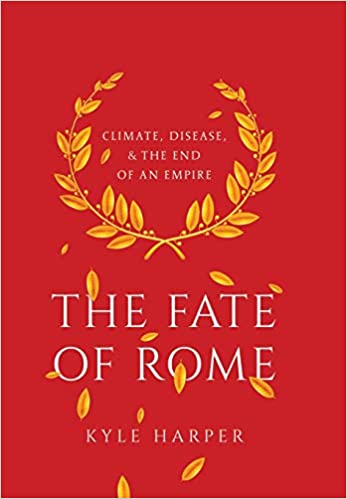 My father didn’t have to search for long in the bookstore for the perfect Christmas gift of 2019. And that is because in the book he gave me then, the “elements that may seem disconnected in principle” are right there in the title: Ancient Rome meets climate change and pandemics.  Do I need to say anything else to convince you that you need to get a copy of this book right away?

I read The Fate of Rome in January of 2020, precisely when coronavirus was starting to do some headlines all over the world. But just as anyone else, I was still oblivious to the fact that I was living in times that will be described by the historians of the future in the same way that Harper describes the times of the Roman Empire.

You probably have the same foundational assumption about History that I had before I read The Fate of Rome, i.e., it is dictated mostly by humans’ actions. Sure, the Vesuvius did this, and a bad crop of potatoes in Ireland did that. However, Nature’s role in  History books always seems to be that of the stage where some humans play games. What Harper does is to turn things upside down, making Nature the leading figure and tiny humans just its puppets.

Three climate periods (the Roman Climatic Optimum, the Roman Transition Period, and the Late Antiquity Little Ice Age), and three pandemics (the Antonine Plague 165-180 AD, the Plague of Cyprian 249-262 AD, and the Plague of Justinian 541-549 AD) are the main protagonists of this book, while the emperors, philosophers and writers just their ephemeral toys.

I used to think that humans’ creations were the most essential History sources – perhaps the only ones. Manuscripts, tombs, and ruins were the only things that mattered to recreate events in the past. But Harper showed me that chemicals in the atmosphere, geological sediments in the Earth and DNA archives in bones deserve the same ranking in importance.

As one prominent reviewer wrote, “Harper is a Gibbons for the 21st century”.